The rise and fall of General Motors

There's a lot of talk about why General Motors slid into bankruptcy protection this week, but I think you can summarize the situation with two of the company's old cars (photos from the 2009 New York Times GM Timeline): 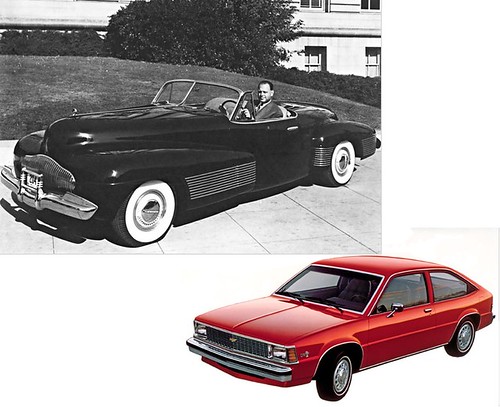 Top left, the amazing and beautiful 1938 Buick Y-Job concept car prototype (not a beautiful name, but still...), driven by GM design head Harvey J. Earl. That car appeared as the world's first concept vehicle, as GM was ascending to its all-time high U.S. market share, which reached 54% in 1954. It heralded the beginning of artistic design in automobiles, which through the 1920s had looked purely functional and utilitarian.

Bottom right, the 1980 Chevrolet Citation, a front-wheel-drive response to smaller Japanese cars from Toyota, Honda, and Datsun. The Citation was a big red hunk of meh, which drove poorly and lost sales in each of its five years on the market. The 1980s saw GM and other American car makers creating poor imitations of more successful foreign design ideas. GM was by then descending into its current state.