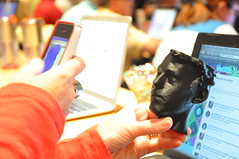 My wife Air live blogged the first day's talks here at the 9th annual Gnomedex conference, and you can also watch the live video stream on the website. I posted a bunch of photos. Here are my written impressions.

Something feels a little looser, and perhaps a bit more relaxed, about this year's meeting. There's a big turnover in attendees: more new people than usual, more women, and a lot more locals from the Seattle area. More Windows laptops than before, interestingly, and more Nikon cameras with fewer Canons. A sign of tech gadget trends generally? I'm not sure.

As always, the individual presentations roamed all over the map, and some were better than others. For example, Bad Astronomer Dr. Phil Plait's talk about skepticism was fun, but also not anything new for those of us who read his blog. However, it was also great as a perfect precursor to Christine Peterson, who invented the term open source some years ago, but is now focused on life extension, i.e. using various dietary, technological, and other methods to improve health and significantly extend the human lifespan.

As Lee LeFever quipped on Twitter, "The life extension talk is a great followup to the skepticism talk because it provides so many ideas of which to be skeptical." My thought was, her talk seemed like hard reductionist nerdery focused somewhere it may not apply very well. My perspective may be different because I have cancer; for me, life extension is just living, you know? But I also feel that not everything is an engineering problem.

There were a number of those dichotomies through the day. Some other notes I took today:

We had a great trip down to Seattle via Chuckanut Drive with kk+ and Fierce Kitty. Tonight Air and I are sleeping in the Edgewater Hotel on Seattle's Pier 67, next to the conference venue, and tonight is also the 45th anniversary of the day the Beatles stayed in this same hotel and fished out the window.

Ahh the Chuckanut Drive - an excllent way to leisurely meander to Gnome-fest. Thanks for your notes - missed it this year but enjoyed seeing the buzz from afar.