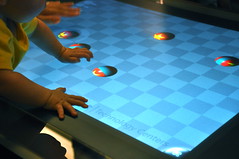 Gnomedex 9 ended several days ago, but I needed to think about it a bit before writing my overall impressions. Each year (I've been part of five Gnomedexes now) has a different vibe, and this one was a bit hard to pin down.

It was certainly less confrontational. For whatever reason, none of the previous web-heavy-hitter attendees—Dave Winer, Steve Gillmor, Sarah Lacy, Jason Calacanis, Mark Canter, Doug Kaye, Adam Curry, et. al.—was there this time, which made for less high-level arguing (or grandstanding). And while many of the sessions were fascinating, I didn't get my mind blown the way some of last year's talks did to me.

I think, perhaps, it was not quite as inspiring, but more fun. Notes and quotes:

I was also glad to have a hug with Drew Olanoff, who was diagnosed with cancer only three months ago and has turned it into a worldwide fundraising effort already. I Blame Drew's Cancer that I didn't manage that when I found out about my cancer in 2007.

On our last night in Seattle, Air and I spent the dinner hour pounding open steamed crab legs with little wooden hammers, then had a drink and watched the Moon set behind a sailboat at our hotel. The next morning as we left the hotel driveway, we saw this: 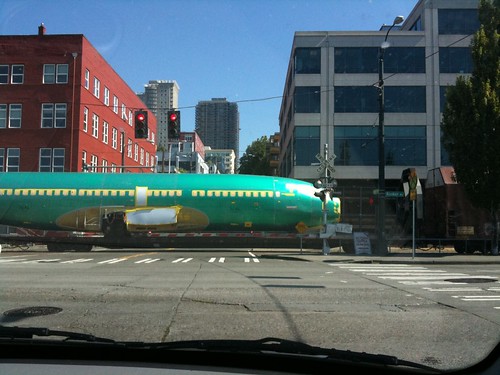 I'd say it was worth going.

interesting that ONE tweet showed up challenging the 9yo stat.

1) the post the tweet referenced is a year old. last month there were 460,000 layoffs. that’s better then the 550,000 the year before. point is that post was written before the continuing homeless family crisis really started here is a newer post https://homelessness.change.org/blog/view/shelters_see_flood_of_homeless_families “The latest numbers from the Department of Housing and Urban Development show that the number of homeless families rose 9 percent last year. In rural and suburban areas, homeless families increased by a whopping 56 percent.”

2) the post referenced is debating the math between 13yo and 17yo. ok, pick he average age at 11, or 15 – they are still children. the average homeless person is a child – better? STILL SUCKS!

the rest in the series can be found on my about page. including the one on children

It only takes one tweet to make the point.

Indeed, it does suck regardless of the average age, but it's worth using accurate numbers if we can get them. Saying that the average homeless person in America is nine is shocking indeed—but it's not helpful if it's untrue, and especially so if the math it would require to generate that number makes no sense.

Addressing the problems of homelessness starts with understanding the scope and demographics of the problem, as you know better than I do. If we're mistaken about who we think is homeless, we'll be mistaken in what we try to do about it.

Well, it was certainly worth having you there... again. :)

You must read these books YOU CAN HEAL YOUR LIFE BY LOUISE HAY AND HIDDEN MESSAGES IN WATER BY MASURU EMOTO AND BELIEVE ME YOU WILL CURE YOUR CANCER.

LOOK AT THE WORD DISEASE. THE PREFIX IS DIS. AND DIS MEANS NOT. NOW SEPERATE THE WORD DISEASE. DIS-EASE. IF YOU ARE NOT AT EASE THEN YOU CREATE A DISEASE. WE MUST FORGIVE EVERYONE AND NOT HAVE ANYTHING AGAINST LOVE ONE'S AND OUR NEIGHBOR'S. THINK IF A DOCTOR WERE TO PUT YOU IN A ROOM WITH SOMEONE AND THAT SOMEONE IS SOMEBODY YOU CAN'T STAND AND HE TAKES ALL YOUR VITAL SIGNS YOU WILL BE OFF. YOU WILL BE NOT AT EASE. NOW IF REPLACES THAT PERSON WITH SOMEONE YOU LOVE THAN YOU WILL BE AT EASE. WHICH YOU WILL NOT CREATE A DISEASE. DIS-EASE. LOVE CURES!!!

- I can't take you at all seriously if you write in all capital letters. They don't make it seem like what you're writing is important, just that you're shouting like a madman.

- Sure, being happy can help your body cope with many diseases, and can improve outcomes to some degree. Yet would you say to someone who's lost a leg that they should rely on their mental state to regenerate the leg? Cancer is just as physical: merely because it's inside our bodies doesn't mean we can cure it by mental magic.

I am a pretty happy guy, and maybe that's one reason (in small addition to the most important thing, top-notch cancer treatment from excellent medical teams!) that I've lived almost three years with this cancer. But I'm sorry, your advice is silly.