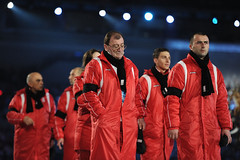 Tonight's Winter Olympics opening ceremony was impressive, if often a bit phallic. There was one technical glitch with the hydraulics for the first, indoor cauldron in B.C. Place Stadium, but the ceremony did the most important thing right.

That was to remember Nodar Kumaritashvili, who died this morning in a terrifying crash during a training run on the Whistler luge track, at the age of 21. (He was born the year the Winter Olympics were last in Canada, in Calgary in 1988.) He was the fourth athlete to die during a sporting event at the Winter Games since they began in 1924.

Jacques Rogge, the head of the International Olympic Committee, pre-empted his prepared remarks with a memorial to Kumaritashvili. Vancouver head organizer John Furlong also included the late athlete in his speech. There was a minute of silence during the ceremony, and a standing ovation for the remaining members of the small Georgian team, walking sadly wearing black armbands.

And the bonus? Instead of the rumoured Celine Dion, we got a spectacular k.d. lang. Good choice.

kd lang was amazing. I have never seen someone give so much in a performance. Very inspirational.

Somehow I never get tired of "Hallelujah" when it's performed properly either.