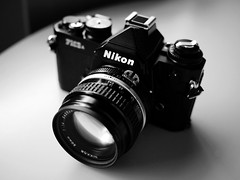 Camera nerds have strange obsessions. Among film cameras, the Leica M series of small rangefinder devices is probably top among photo fetishists, who might argue about whether the original 1950s M3 or the current M7 or MP is the optimum design.

But to me, the manual-focus, precision-built electromechanical Nikon FM3A SLR is the real star of these old-school cameras. It was an oddity when Nikon introduced it in 2001—by which time ergonomically-shaped, plastic-bodied autofocus cameras were what almost everyone used, and digital was poised to take over from film almost entirely. (Even the FA of 1983, or the intro-level FG I owned around the same time, had more modern features in many respects.)

But Nikon was intentionally building a modernized retro camera for those fetishists. It offers basic but powerful light-metering, manual focus assistance, fill-flash compatibility, and aperture-priority automation if you want it. But it is also a fully-mechanical machine that will operate perfectly (except for the light meter) without any batteries. All the power to run it can come from energy stored in springs when you ratchet the film advance lever with your thumb, something that's hard to comprehend for anyone who's used to today's battery-sucking digital beasts, or even my 1988 autofocus Nikon F4.

Nikon only made the FM3A for five years, and manufactures nothing at all like it today. (Indeed, almost no one besides Leica makes fully mechanical cameras anymore.) If you can find one, it sells for pretty close to the $800 the model fetched when new, which is still a fraction the cost of a Leica or a top-of-the-line digital Nikon SLR. And it will use most Nikon-mount lenses made between 1977 and quite recently, when the company stopped including aperture rings on their SLR lenses.

I'd compare this rugged Nikon with modern versions of the Fender Stratocaster guitar, or a brand-new fountain pen: the FM3A looks superficially like something created decades earlier, and works pretty much that way too, but it has some clever modern enhancements that smooth the way for enthusiasts or professionals to use it elegantly. It's neat that Nikon ever decided to create it, and like the still-manufactured Nikon F6 film SLR, it's probably among the last of its kind.

The FM3A is the camera that got me back into film photography in 2002 or so with the 45mm Tessar.

Lovely camera, but I purchased a Leica M6TTL later that same year, the FM3A just gathered dust after that, and I ended up giving it to a struggling photographer whose Nikon had been stolen from his car (I kept the Nikon F3 my father gave me). A used M6 is about $1200, and I think it is much better value than a used FM3A at $800.

Longstanding rumors claim the 45mm lens was actually made by Cosina.

Of course those Leica lenses generally sell for a considerable premium, even used.

Then again, if someone's looking for a real bargain, a Nikon FM or a '70s-era Canon or Olympus body will do a great job too -- and you can find any of them, sometimes with a fine lens included, for less than $100.

I've dreamed of having a Nikon FM3 for a big while (mine was a modest Nikon FE). It's the top evolution of Nikon's manual series. It worked full mechanical too.
I like the simplicity of those camera settings.

While the FM3A is wonderful, the FE is very nearly the same camera for a whole lot less money. No, it doesn't work at all shutter speeds mechanically (just 1/90th of a second), but with two tiny batteries it'll run for ages, it has nearly all the other features of the FM3A (except it maxes out at 1/1000th instead of 1/4000th on the shutter dial) and the same ergonomics, it has the lovely in-finder match-needle meter display, and it works with pre-1977 non-AI lenses (which the FM3A doesn't -- and those lenses are quite cheap now).

The FE also doesn't have TTL flash or flash compensation, but otherwise it's the essence of a well-designed manual-focus auto-exposure camera. In fact, since the FM3A is too pricey for me, just for fun, I have a line on a cheap FE right now... :)

Well yes, my FE *was* much beloved. I took great pictures (while having fun) with it. But is is now broken sadly.
Thanks for cheering me up. ;)

I'm thinning out my camera collection and am having a hard time deciding which camera to sell. My FM3a or my M6 classic. Sure the M6 is a bit more of a solid brick but affording the lenses I want for it another matter all together. Nikon's best of primes sell for hundreds not thousands. Still if i dump the M6 I won't be able to hang out on all those cool Leica boards.

You're certainly right about the lenses, especially used manual-focus Nikkors compared to Leicas. Why don't you flip a coin? If you're really okay with either choice, that will decide. If not, you'll know in your heart if the flip feels wrong.

And you can still hang out on the Leica boards if you don't tell them...

By the way, in case you didn't notice, I got myself a Nikon FE, which is sort of a low-rent FM3A.