A couple of months ago, my regular CT scan showed the first-ever shrinkage of cancer tumours in my three-year history with the disease, but I warned that, "I still have cancer, a lot of it all over the inside of my chest, but just a little less of it than I did a couple of months ago." One scan was not yet a trend.

But two could be, and my latest scan showed further shrinkage, with the biggest malignant blob in my left lung going from 3.1 cm down to 2.9 cm in diameter, which means it is smaller than it was in this scan from September: 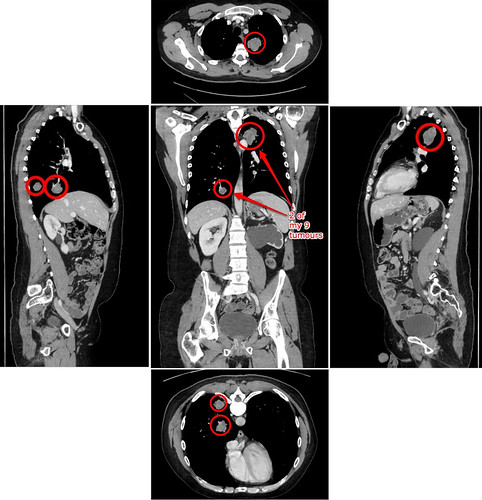 Some of the others have also shrunk, while other smaller tumours have simply not gotten bigger. The aggressive and sometimes horrific chemotherapy I take every two weeks is doing something. I feel pretty good about that.

I'll remind you that this is not remission, not a cure, not me being "all better." I'm not sure if those things will ever come, and I've already beat the odds on this disease by staying alive as long as I have. What it does mean is that I'm likely to live a while longer yet (whatever "a while" is), which is the most realistic thing I can keep hoping for.

Oh, and happy Earth Day, everyone.

Sending vibes for more shrinking and many years of good health and happiness.

hooray for good news. I've been waiting for you to update the 'cancer is getting smaller' post and i'm super happy that it's going in this direction... ok, maybe it's 'for now', but for now is quite OK :) More time is still more time :)
~ All best, Shelley

We're happy to hear this. This is a reduction of about 18% in volume, i.e. the tumors have shrunk by almost 1/5. We hope this continues.

Now that's the kind of shrinkage that I like!

That's such good news, I am so happy for you and your family. Good news is good news and your Dad's numbers on the shrinkage sure does sound good. YAY!!! Keep going the way you are, we are all pulling for you.
Barbra

These are probably the best news I've heard all week :)

I am thinking we need to organize a celebratory bash, because well, i wanted you guys to come to my blogiversary but obviously it was the wrong week for that! :)

Well, let's not get out of hand. The good news doesn't make me any less tired, and even if this is a trend, it's just the beginning of one. I'm happy, but I also have to slog on.

However, as the weather improves in spring and summer, I expect we'll be having some parties and barbecues. And there's always my own 10th blogiversary in October...

I am so happy to read this news Derek!

Well, better late than never (for my comment) and while I understand that the side effects are still pretty bad, here's another "yay" for things going in the right direction ...