Before it erupted exactly 30 years ago, on May 18, 1980, Mount St. Helens in southwestern Washington State—about 300 km away from my house—was a beautiful peak, often compared to Mount Fuji in Japan: 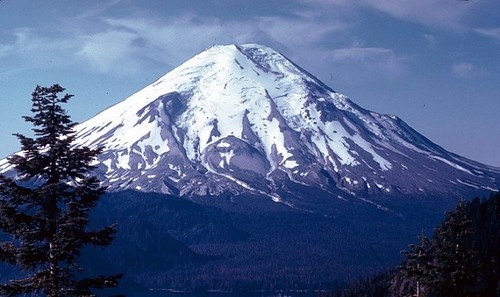 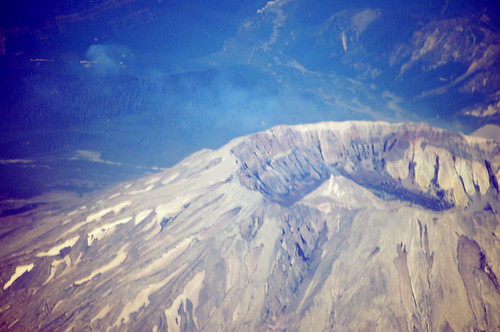 UPDATE: Via Phil Plait, here's a very cool NASA page where you can click each year (starting in 1979) to see a satellite view of the area around St. Helens. There's also a USGS page on the anniversary, which (despite its old-fashioned web page design) has lots of cool stuff, including some excellent video retrospectives.

For months before the eruption, the north side of the mountain had been swelling (at up to 6 feet per day!), expanding ominously as scientists monitored numerous escalating quakes emanating from its magma chamber. An eruption seemed to be coming, but until that May morning no one had seen a volcano erupt sideways, so quite a few people were uknowingly in the danger zone to the north.

At 8:32 a.m. that morning, St. Helens did erupt sideways. The north side of the mountain rocketed downslope in one of the largest landslides ever recorded, releasing the ash, rock, and other pyroclastic material it had been holding back, superheated to hundreds of degrees. The blast flared out across the landscape, flattening trees, burying lakes, destroying logging equipment, burying and partially melting cars and trucks, and killing nearly everything—animals, plants, people, whatever—for 30 km in that direction. It took less than a minute, then the eruption proceeded upward, ash blowing east with the prevailing winds.

Fifty-seven people died, but the numbers would have been much higher if it hadn't been a Sunday morning and Weyerhaeuser loggers had been working in the blast zone. We heard the sound (loudly!) in Vancouver, though those winds blew the massive ash cloud a different direction and none landed here.

Though much has come to life again there, the land north of St. Helens is still a grey-brown scar. Thousands of dead logs still float on the surface of Spirit Lake, from when the eruption pushed its entire contents up a ridge and the water then sloshed back, dragging trees with it back into its basin.

I was just about to turn 11 when the eruption happened, and I became a bit obsessed with it, as 11-year-old boys are prone to do. I collected books, newspapers, and magazines, and read them all. When my parents and I drove down Interstate 5 that summer on the way to California, I was glued to the window as we passed ash-choked rivers and roads still under repair.

The photos at The Big Picture bring those memories back: the maw of the mountain belching hellacious, evil pillows of mushroom clouds; the overflowing grey rivers taking out bridges and trains; huge evergreen trees stripped of branches and foliage, snapped off at their bases like chopsticks and spread across the landscape as if steamrolled; helicopters landing on moonscapes to find nothing and no one alive.

Mount St. Helens taught me that the Earth is powerful and disinterested, that it can shift and crack and explode, and we can do nothing to prevent it. The danger can be close by, and it's worth knowing about, so we might prepare as best we can, and learn as much as possible, so that maybe we can predict. But only sometimes.

I spent 5 summers at Spirit Lake...

That I can't say. I've never been near enough to the mountain to see the caldera from the ground. I've seen the non-blown-out side from southwest Washington, and the caldera from a jet as above, but that's it. But I remember the name Harry Truman.

In the 80's and 90's I worked freelance video. My main gig was with a German corespondent and we did feature documentaries many places in North America. We covered Mt. St. Helens. I was in the crater on top of the mountain. (we went up in a helicopter). It was one of the strangest places I have ever seen. You get an overwhelming feeling from the devastation. I unfortunately did not bring my camera into the crater, (for safety reasons), but sure wish I had. I may have some pictures of other places near the mountain somewhere in my archives. I'll have to see if I can find them.

I was obsessed with Mt. St. Helens too even though I was living in Newfoundland at the time. I still have a well-worn book about it (just called "VOLCANO"). But I didn't realize (or had forgotten) that it could be heard that far away - that is beyond awe-inspiring to me still...

My grandmother climbed that mountain... we went down the Oregon coast a few years after the blast and she was in tears looking at it. I collected some ash and pumice from the area, still have it around here somewhere.

I might have the same book in the house somewhere. I should see if I can find it.