All hail the blue whale

A blue whale is an astonishing creature: the largest, heaviest species of animal that has ever lived since multicellular animals first arose on Earth more than 600 million (UPDATE: or was it 2.1 billion?) years ago. Bigger than any dinosaur, extinct aquatic reptile, shark, or squid; longer and heavier even than many trees; more massive than a fully-loaded 757 airliner. Yet blue whales feed almost exclusively on stupendous numbers of krill, tiny shrimp-like marine crustaceans. And we are alive at the same time, sharing the planet with a few thousand of these cetaceans, who range throughout the world's oceans.

The new Beaty Biodiversity Museum at the University of British Columbia has just unveiled one of the few blue whale skeletons on display in the world, and my kids and I went to see it yesterday: 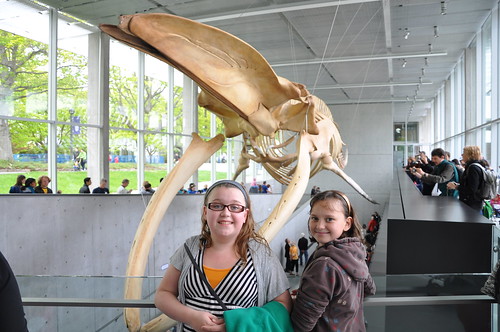 It's hard to capture how large and yet elegant the skeleton is. You can walk underneath it, and when I did that to shoot this movie, it took about 30 seconds to stroll the 26 metres from its chin to its tail:

You could easily fit a car within the whale's rib cage, and a van within its vast mouth. But the overall shape of the skeleton, with its stupendously long spine, is lithe and streamlined, well optimized for slipping through the water.

You can also see from the skeleton that whales and humans are not too distantly related (at least compared to other animals in the world). Whales are, of course, warm-blooded, air breathing mammals. They share a common ancestor with large land herbivores like hippopotamuses, probably around 50 million years in the past.

You can see that relationship directly in the bones of this whale at UBC, a fairly large female that died and washed up on a Prince Edward Island beach in 1987, and which spent two decades buried in the soil nearby before it was moved here to the West Coast and reconstructed over the past three years. The spine shows how she swam, moving her tail up and down, the way we bend our own backs—not side to side like fish and crocodiles.

And check out these funny "floating" bones: 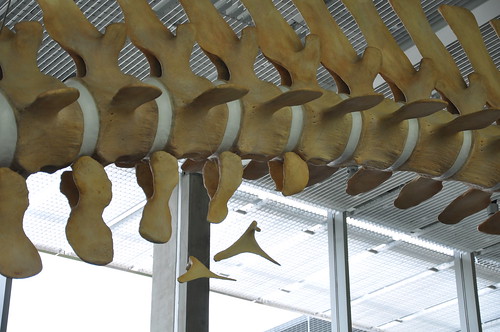 They are invisible in the living animal, buried in muscle and blubber, but they are vestigial pelvic bones, so small on the whale that they're of similar size to the ones in our own human bodies—the ones that form our hips and anchor our legs. But blue whales have no hind legs: their pelvic bones are reminders of the legs their ancestors used to have, many millions of years ago.

The titanic vertebrae above those little floaters are about the size of a large home appliance, like a stove or a barbecue, but their structure is the same as the ones in your spine. Even cooler, look at the bones in the fin: 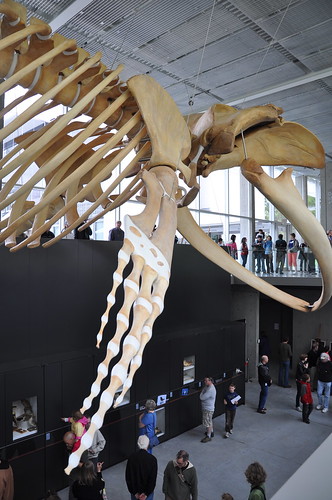 You don't have to be trained in anatomy to see how much they look like an elongated hand. Someone who is trained in human anatomy can see the same bones we have in our wrists, palms, and fingers. When this whale was alive they formed a giant steering paddle instead of a foreleg, with the "fingers" hidden by tissue, like an enormous mitten.

Though there are various whale watching locations around the world where you can see them, rather few people get a chance to observe blue whales in the wild. They are solitary animals with similar lifespans to humans, living perhaps 60 years. They can travel at speeds comparable to that of a cargo ship, about 20 km/h, or 11 knots.

It was a privilege to see even the remains of one of these remarkable animals up close. If you're in Vancouver during one of the few other preview days this summer, or once the museum opens officially in the autumn, I recommend you go look. Maybe hold up your hand to those huge fins, or feel your hip bones, and compare them yourself.

Recently a blue whale skeleton has been put on display at the Canadian Museum of Nature in Ottawa. Thanks for sort of reminding me that I must go see it!

I've often wondered what it was that made whales' ancestors decide that they'd had enough of land and were going back into the water. I'm guessing unaffordable real estate.

Must have been, since they had to change from being herbivores to being carnivores in the process too. But sometimes you have to do what you have to do to fit into the new neighbourhood.

Great article! As Andrea noted (previous comment) there is another blue whale skeleton, on display in the nature museum in Ottawa. There is more information on this subject at Canada's Got Treasures, which is also a space where you can share your images and videos with the rest of Canada.