Whoo-ee, that bout of chemo was hard. Before each session, I get blood tests to see how well my immune system is doing, and this time my readings were definitely borderline—but not too far from where I was last time, a couple of weeks ago. So my oncologist and I decided to proceed with the drugs.

I don't know if it was my low blood counts or something else, but I was completely flattened from Monday through Tuesday—enough that I was barely awake or out of bed except to use the bathroom—and awake, but barely functional, yesterday. You know it's bad when "feeling a lot better" (which I did on Wednesday) means "feeling only vaguely like puking all the time." That pattern is similar to what I've been feeling since returning to chemotherapy in December, but it felt more pronounced this time.

Fortunately, I'd sort of planned for that happening, or at least for what to do afterwards. With the sixth annual Northern Voice conference coming up this weekend, and my parents (who help out quite a bit during the days I'm shut off from the world) traveling to Europe for a couple of weeks, and the general busyness of spring, my wife Air suggested I postpone my subsequent chemo an extra week, till late May, so I get a three-week break instead of just two before the next poison infusion. I asked, and my medical team agreed that was a good idea.

After the past three days, I think it was an extra-good idea. So while I won't be attending the Northern Voice pre-conference party tonight, I do plan to be out at UBC for the main event tomorrow and Saturday.

I also just realized that this is the first time I've mentioned this year's Northern Voice event here on my site. That's weird. To compensate, here's a big angry Northern Voice moose mosaic from Duane: 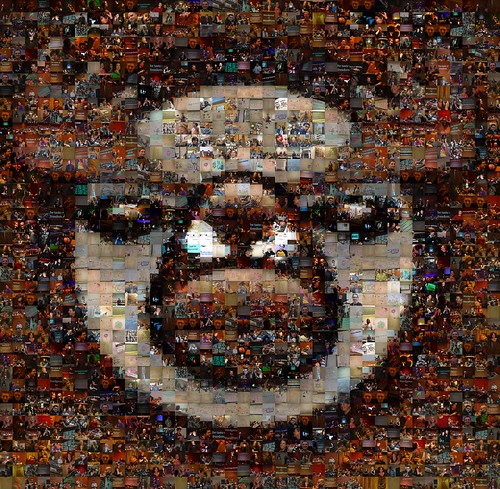 If you're going, my cameras and I will see you there.