New boots, not Tasmanian after all

Two of my three old pairs of Tasmanian-made Blundstone boots now have worn-out, leaky soles (no big deal—the first ones I bought are more than nine years old, and the newest ones are almost six, and are still going strong), so I bought a new pair: 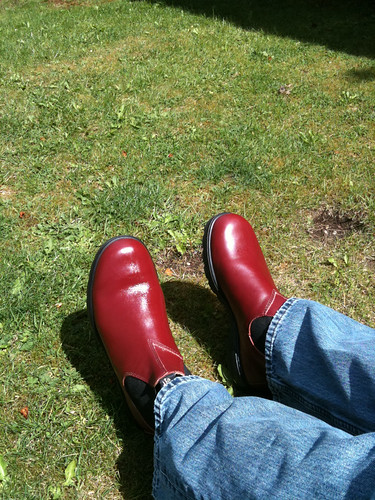 They're rather red (the first time I've seen them in that colour), and super-shiny from waterproofing wax, but will dull down a bit with time. Blundstones remain the most comfortable and useful footwear I've ever owned.

Alas, this pair, while of apparently equal quality to my old ones and just as expensive, was not made in Australia, but in Vietnam, something I didn't notice until I got home. I had simply assumed that "Blunnies" were still Tasmanian in origin, as they had been for well over 100 years. Bad assumption: the globalization of manufacturing marches on.

Though, had I seen the tag at the store, I'd still probably have bought them anyway.

The Blunstone factory shut down in Hobart a couple of years ago.

Production moved to Asia in order to cut costs, apparently. Many who worked in the local factory lost their jobs. You're right in guessing that it is yet another symptom of globalisation.

I had a wonderful pair of Blunstone walking boots that wore out after 7 or 8 years. Blunstones are still great shoes and boots.

I wonder if only the new colour options are made in Vietnam. Maybe the original colours are still made in Tasmania?

Quick Cobbler in Vancouver will put new bottoms on your Blunnies for about $90.

Yeah, John, I was sad to read about the closure after I discovered the change. Maybe RM Williams boots are still made in Australia? Even so, they're a lot more costly here in Canada, so I went with the Blunnies anyway.

David, it doesn't looked like much from Blundstone is still made in Australia—perhaps some gumboots and specialty products—but their workforce there has been substantially reduced since 2007.

Princess, thanks for the tip. $90 is pretty steep, but worth it probably for my brown pair, which have been my favourites. Thanks for the pointer.