Photowalking the City of Glass

If you watched the Olympics in February, and if you don't actually live in Vancouver, you probably wondered whether this place really is as pretty as all those sweeping helicopter shots made it out to be. The answer is yes: 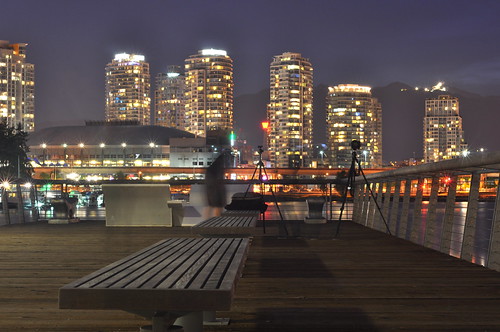 Last night, a few of us took a photowalk along the south shore of False Creek just as the sun was going down. We enjoyed the boats going by, saw a seal and a great blue heron, observed a cormorant catch and eat a crab (my photos of that are coming), and watched the lights of the City of Glass wink on as it got dark.

Jon and Brennan, two of the participants, brought substantial photo rigs, with multiple digital SLR bodies, lenses, and tripods in backpacks. I learned a couple of summers ago that doing so isn't a wise move for me: after hauling my full pack o' gear up Whistler Mountain, I ended up using only my camera and the one lens I'd first mounted on it—the rest was just uncomfortable wasted weight.

So this time I tried to be more minimalist. Despite bringing two camera bodies (my digital Nikon D90 and my recently-purchased vintage Nikon FE film camera), I took along only three lenses, all relatively compact non-zoom primes: a 24 mm wide-angle, a 50 mm normal low-light, and a 135 mm telephoto for the FE. Despite also bringing a monopod for when it got darker, I didn't need a camera bag at all, just my pockets and my usual green Crumpler man purse.

Here are the pictures I took with the D90 (thanks to Brennan for lending me his wacky Tokina 11–16 mm zoom lens for a few shots):

The black-and-whites will have to wait till I process the film (UPDATE: Here they are, with commentary). And my health held out: I managed the whole almost-three-hour expedition without any side-effect meltdowns, at least until I got home. Plus I grabbed some McDonald's afterwards. Mmm, Filet O'Fish.

Beautiful photos, Derek. And, more importantly, sounds like you had a great time. I'm heartened by your engagement in your hobbies. I hope my interest and zest for life comes back sometimes and I'm able to cultivate some post-c interests.

Keep soaking up that beautiful city for those of us who can't.

Hey, Ottawa's not so bad either! (Although I'll do without the winters.)

Your interests in other things will come back. Just remember to pace yourself and to pay attention to what your body is telling you. I always have to be prepared to bail out at the last moment, but fortunately last night I didn't have to.

I agree; these are beautiful photos.