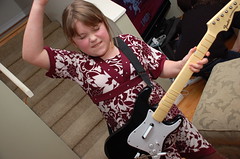 Monday was the last full day for my kids this school year and, as you would expect, there wasn't much schooling going on. In fact, my older daughter Marina organized an air guitar contest for her class, and asked me to put together a CD of appropriate heavy-shredding music that they could wail away to. When I mentioned it online, some of my friends asked for the list.

Here it is. I didn't put the whole songs on CD. Instead I excerpted just the appropriate guitar solos, or edited down a shorter section. They're listed in order from shortest to longest solos:

I've listed the guitarist in parentheses. Notice that all but two of these tracks were recorded before any of the kids in her class was born. Nevertheless, they know many of them from "Rock Band," "Guitar Hero," and retro video shows on TV.

Sure, there are some famous solos missing, from the likes of Guns 'n' Roses, Metallica, Aerosmith, and the like, but I think it's a pretty decent list anyway. And of course I included "Free Bird

I am proud to say I know the vast majority of those songs, but thanks for pointing me to a few new ones (specifically: Even Flow, Hard to Handle, Blues Jam, and Sugarfoot Rag)

"Blues Jam" might be tough to find: as far as I know, it's only on the example CD included with the book "The Stratocaster Chronicles" (2004), celebrating the 50th anniversary of the instrument.

Made a Rhapsody Playlist for it:

Ooh! Ooh! I want to be That Guy and bring up the whole Jimmy Page vs. Dave Davies "Who REALLY Did the Solos On The Kinks' Tunes" thing!

Just because it's fun to look up/read/argue over.

I'd go with this: