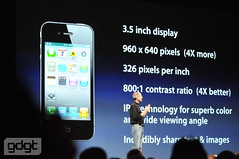 While Steve Jobs was onstage at Apple's World Wide Developers' Conference (WWDC) in San Francisco this morning, announcing the new iPhone 4, we techies on Twitter were, of course, typing furiously. Those commenting on his keynote speech used the #wwdc "hashtag" to identify the topic.

But there were a few of us, spurred by Glenn Fleishman, who wrote snarky commentary as if we were attending the event, using the #fakewwdc hashtag (in the spirit of Fake Steve Jobs).

If you're into that sort of insanely in-joke nerdery, here are selections from my "Fake WWDC" tweets, roughly following the chronology of the real announcements, to be imagined in Steve Jobs's voice:

You can read the entire stream everyone wrote (including some posts in what I think were Tagalog) on Twitter. Most of the others were funnier than mine.