Oil on the water

"What we can't seem to accept," says Roger Ebert, "is that the oil is leaking and we can't stop it."

My friend Kris Krug and web acquaintance Duncan Davidson are two great photographers who recently traveled to the Gulf of Mexico to see what's going on. Some of their results: 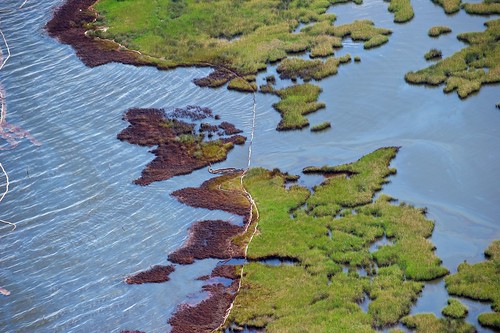 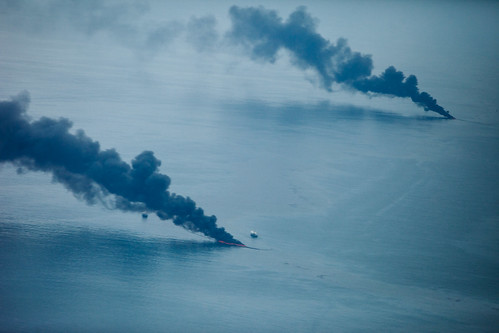 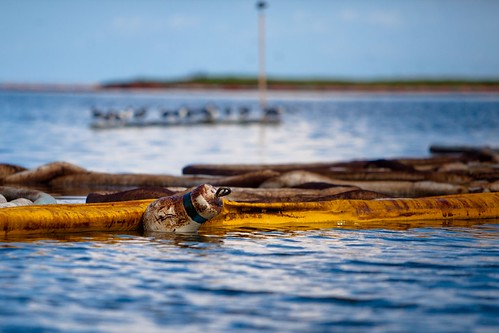 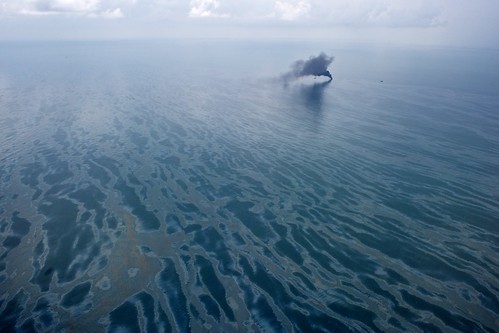 I have a degree in marine biology, granted to me at UBC 20 years ago. In the back of my mind, I often think these days of what the oil is doing to the physiologies of the animals, plants, and microorganisms in the Gulf. (And what oil is doing elsewhere to organisms in the waters of Nigeria, Venezuela, northern Alberta, the Persian Gulf, and elsewhere.)

There's irony. Petroleum is a natural product: millions of years ago, in an ancient ocean, microscopic algae absorbed sunlight and used the energy to build their tiny cells from carbon dioxide dissolved in water from the air. Similarly tiny zooplankton ate some of the algae. Then they all died, and were buried, and with heat and pressure and eons of time their remains turned into goopy sludge buried in layers of sedimentary rock.

There were titanic numbers of those microorganisms, so there's a lot of sludge in our planet's crust, trapped here and there. We extract it, process it, and burn it. The CO2 returns to the atmosphere, eventually to our detriment. Oil power is an extremely awkward, inefficient, roundabout, and time-delayed form of solar power.

And the oil gushing out from a hole we drilled into the bottom of the Gulf of Mexico? The organisms now living in that sea are being poisoned by the remains of their remote ancestors. It's as if the cities of western North America were being inundated by a spewing geyser of fossil dinosaur bones, unleashed from the Badlands east of the Rockies, burying us in the petrified skeletons of our distant relatives.

Awesome pics- can you explain the first one?

It's an aerial view from a small plane of coastal lowland marsh/bayou. The open Gulf of Mexico is to the left, inland waters to the right. The stringy-looking thing running top to bottom is an oil boom, and the brown stains are oil on the vegetation.

With 606 oilfields, the Niger delta supplies 40% of all the crude the United States imports and is the world capital of oil pollution. Life expectancy in its rural communities, half of which have no access to clean water, has fallen to little more than 40 years over the past two generations. Locals blame the oil that pollutes their land and can scarcely believe the contrast with the steps taken by BP and the US government to try to stop the Gulf oil leak and to protect the Louisiana shoreline from pollution.

"If this Gulf accident had happened in Nigeria, neither the government nor the company would have paid much attention," said the writer Ben Ikari, a member of the Ogoni people. "This kind of spill happens all the time in the delta."

"The oil companies just ignore it. The lawmakers do not care and people must live with pollution daily. The situation is now worse than it was 30 years ago. Nothing is changing. When I see the efforts that are being made in the US I feel a great sense of sadness at the double standards. What they do in the US or in Europe is very different."

Quite true, and quite sad. We obsess too about rarities like children kidnapped by strangers while millions of children die of malnutrition and preventable disease. We worry about cell phones and high-tension wires while pumping ever more carbon dioxide into the atmosphere. We fear burglary while in other countries people must fear neighbours or militias or police or the army with guns or machetes, coming for their families. Injustice abounds.