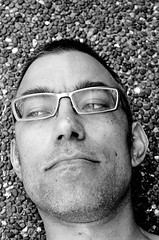 Yesterday around lunchtime I was pretty tired (cancer-treatment side effects, but I'll avoid detail today), so I went out in the yard with the dog and sat in the sun for a spell. I noticed that the stone pathway tiles down the side of our house had only recently been shaded from the sun, and were still very warm, so I lay down on them. It was like a hot-stone spa treatment, quite wonderful.

Then I closed my eyes and listened. We humans are primates, and thus vision dominates our senses. Most of the time we filter out sounds, but this time I focused on trying to detect everything I could hear from our suburban yard. It's not easy to pay attention to it all. There were lots of noises.

Rustling leaves in the trees. Flies buzzing around each other, probably mating. The slightly different buzz of bees pollinating flowers in the grass. Crows chattering or cawing at one another from tree branches or power lines. The occasional chickadee. A distant low continuous roar which, in a different century, could have been a river, but which I know was traffic on the Trans-Canada highway down in the central valley of Burnaby, north of where we live. The occasional car passing by. Commercial jets, one after the other with a few minutes' delay between them, flying overhead on their way into a long slow U-turn to Vancouver Airport. A distant siren—police or ambulance. A couple walking by with their dog, and our dog barking at them. The horn of a train, also down in the valley, and the deep thrum of its engine.

If I hadn't been paying specific attention, I might only have consciously noticed Lucy barking, and the planes. A couple of hundred years ago, our property was forest, so only the leaves and flies and bees and crows and songbirds would have been here. Despite all the different sounds, I was surprised how quiet it is around here, despite our proximity to B.C.'s largest mall and major streets like Kingsway.