Jellyfish, our past and future 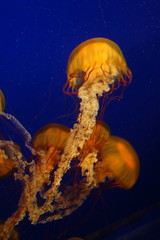 Five years ago, for our tenth anniversary, my wife air got herself a tattoo of a bee, with the number 10 in the middle of its back. The tattoo is awesome, and at the time I considered getting myself something similar. But—as I'm prone to do—I proctrastinated, and now with all the cancer and chemotherapy and other crap that affects my circulation, immune system, and blood clotting, it's apparently no longer safe for me to get myself inked.

Since I specialized in invertebrate sea creatures when I was studying for my marine biology degree (back when Air and I first met in the late '80s), I had considered designs based on a couple of those animal groups: sea stars and jellyfish. Both are fascinating, widespread, and remarkably alien to those of us accustomed to bilateral symmetry, central nervous systems, and skeletons.

While personally I find echinoderms such as sea stars (and sea urchins, sea anemones, sea cucumbers, sand dollars, brittle stars, and crinoids) more appealing, it seems that in the long run, jellyfish are more important. They and their cnidarian kin are ancient: the earliest fossils are around 580 million years old. Relatively speaking, they are simply built, without brains or blood or any hard structure.

But they are remarkably resilient. As a recent article in Smithsonian magazine reveals, it seems that as human activities change the Earth's climate, we're making many ocean environments more amenable to jellyfish—often to the detriment of other types of life, including ourselves:

With the world's human population expected to increase 32 percent by 2050, to 9.1 billion, a number of environmental conditions that favor jellyfish are predicted to become more common. Jellyfish reproduce and move into new niches so rapidly that even within 40 years, some experts predict "regime shifts" in which jellyfish assume dominance in one marine ecosystem after another.

There are genuine consequences for people too, not just in fisheries and on beaches. Massive jellyfish blooms have clogged the water intakes of electrical plants, causing power failures—and have apparently even partially disabled a nuclear-powered U.S. aircraft carrier. Last month, the CBC broadcast a documentary called "Jellyfish Invasion!" highlighting the increased prevalence of jellyfish in numerous locations around the world.

Air and I witnessed several local jellyfish blooms when we worked as park naturalists for the Greater Vancouver Regional District. I recall sitting on the rocks near Admiralty Point in Burrard Inlet in the summer of 1988, watching thousands and thousands of moon jellies (some of them as wide as a truck tire), as well as the occasional sea nettle, drifting by in the tide. That bloom was probably part of the natural cycle around here.

But increasing jellyfish blooms elsewhere are not so much an invasion as a symptom of warming, acidifying waters, many of which may be our fault as human beings. However, as that Smithsonian article notes, we...

...may be overreacting to a few isolated jelly outbreaks. Not enough is known about historical jelly abundances to distinguish between natural fluctuation and long-term change. [...] Are there really more of the creatures, or are people simply more prone to notice and report them? Are the jellyfish changing, or is our perspective? [Researcher Steven] Haddock worries that jellyfish are taking the blame for messing up the seas when we're the ones causing the damage.

One of Haddock's colleagues at the Monterey Bay Aquarium, Chad Widmer, has a jellyfish tattoo, by the way.