Since our local Save-On-Foods outlet shut down its photo lab last year, I've been taking my rolls of film to the Costco down the hill, which will process them, make prints, and scan at high resolution to CD for a very reasonable price (about $9 Cdn per roll, taxes included). They do a great job in an hour or so, giving me the benefits of both film and digital photography.

Alas, they are now scheduled to stop handling 35 mm film in mid-September too. There's just not enough demand. (Apparently, they are the only Costco outlet in Western Canada still processing photo film.) So after that, I'll have to pay a higher price at one of the photo specialty stores in the area. Good thing Costco is still doing the work right now, though: I'm taking both digital and film photos of my cousin's wedding tomorrow, so I'll have a big batch of pictures to run through the service next week. 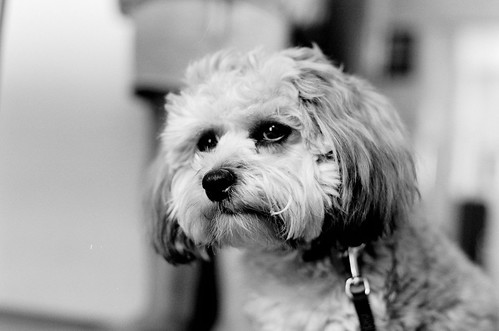 It's a pity. Film photography is not going away, and people seem to like when I use it, but the days of truly cheap developing may be over.

I'll check Walmart, but I have a personal boycott of StupidSuperstore, even if they do process film cheap.

Derek I look forward to your pictures of the wedding! See you there. Barbra

I always find the argument that opens the "Is Film Going Away?" article specious. Yes, AM survived FM and LPs survived CDs, but what about floppy discs and cassette tapes? What about vaudeville shows and silent films?

The argument seems about as effective as the "you should have babies because you might have the next Einstein" theory. I might also have the next Hitler.

The simpler way to frame the question is this: if there's sufficient demand for something, somebody will manufacture it. I imagine film and its ancillary services will go the way of the LP. A few people want it, so a small (or, at least, smaller than it once was) industry exists to serve it.

Film will eventually go the way of other artists media. Processing will likely go to "mail away" locations at small centers or specialty graphics arts places. Its not going to "go away" just like oil paint didn't go away but it will not become so much a consumer staple.

Many professional photographers still use film, especially in larger formats, and manufacturers like Kodak and Fuji continue to introduce improved types, but you're quite right that it's becoming a specialty market, like LPs, or vacuum tubes produced for guitar amplifiers and audiophiles. I'm not worried that I won't be able to get any more film in the near future, or that it will be impossible to process, just that the cheap-and-easy processing I became used to might be harder to find—just like you can't find tube testers at supermarkets anymore. Then again, cheap one-hour film developing was a relatively short-lived phenomenon anyway: until the 1980s, film processing was still relatively pricey and took days to get done, often by mail.

There is a very easy way to keep shooting: Develop your own.

I do everything but K-14 :) And the initial cost (depending on how fancy you want to get) is not that high.

The Epson V700 is also an excellent scanner that I use for all of my film work. I am 90%+ film shooting and went home processing for everything after the Costco downtown stopped developing.

My dad used to have a full colour-print darkroom in our basement, and while I got pretty good at developing and printing black and white, and even processed some E-6 slide film once or twice, I always found it a great big hassle. Plus you still have to buy all the nasty chemicals, then find a good safe way to dispose of them.

So while my dad still has the enlarger and a lot of the film reels and print trays and stuff kicking around that I could probably use, I think if it came down to having to to it myself, I'd just stick with digital. He doesn't make any of his own prints any more either.

Though B&W film development isn't that complex and the chemicals aren't really toxic and easily available (you can make it out of instant coffee).

Sure, but I'll note that I don't change my own oil in our cars either. :)

Ah then :) Clearly we come from opposite ends of the spectrum ;)

I just sent two rolls of Kodachrome to the one lab in the world that still processes it. Cost for processing/shipping is close to $30.

An extreme example, but as film gets more expensive and less convenient to deal with, not only will it lose photographers to a pure digital workflow, but more sadly, new photographers who might have otherwise explored film in addition to digital photography :-(

I'm sure old-timey photographers lamented the loss of glass plate negatives too. Even today, those who use bellows-equipped large-format view cameras (with the fabric hood and all) can point out the much greater discipline required and finer control over focus, composition, perspective, and depth of field permitted with that kind of tool.

But while I find those techniques fascinating, I've never been bothered to go through the work it takes to learn how to take pictures that way. I've always gone the "easy" route, using a handheld camera with a viewfinder, some sort of light meter, and usually some sort of exposure automation. Digital capture just goes further down that path.

And with that, I'm off to pick up some more film photos from Costco this afternoonwhile I have the chance.

I'm still shooting with slide film myself but only on special occasions (weddings, vacations, & festivals). Too much of a hassle otherwise. London Drugs is pretty good about processing/mounting & scanning but it's definitely getting pricey ($30 min/ roll of 36!).