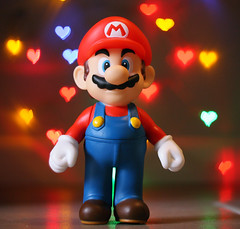 It's both the 25th anniversary of the video game Super Mario Bros. and the 10th anniversary of the first public release of Apple's Mac OS X operating system. These are nerdy occasions, to be sure, but also significant ones for a large number of people (at least in the developed world).

Mario and his bizarre clan of mushroom-eating, head-stomping, turtle-shell–throwing game cohorts were the first—and are still the most famous—characters to emerge into popular culture from the world of video games. (I don't count the Space Invaders as "characters.") Millions of us have deep, muscle-memory childhood associations with Mario, Luigi, Peach, Bowser, Donkey Kong and his primate family, Toad, Boo, Wario, and even the anonymous goombas and tortoises, green pipes and coin blocks, and endless fields of pixelated bricks and banana barrels we traversed for hours with our numb thumbs.

For most, Mac OS X lies more in the background. No, it wasn't the true revolution that the original Mac OS had been 16 years earlier, in 1984. But when the Mac OS X Public Beta emerged with its shocking, "lickable" 3D Aqua appearance and modern technical infrastructure in 2000, it promised that Apple would remain relevant in the world of computing—that there would still be something to compete with PCs running Windows, and present different ideas about how we would interact with the machines that have come to dominate our lives.

Up in our closet, my family has an old Super Nintendo Entertainment System box with its controllers. We also have a Nintendo 64 and GameCube stowed away, while the Wii sits next to our big LCD television in the living room and we use it all the time. Our kids' piano teacher has the original Nintendo Entertainment System hooked up in her studio, and our daughters sometimes play the 1985 Super Mario Bros. game cartridge on it to kill time, or via download on our Wii at home. It's still fun, as it was when I first tried it at age 16, and as are its many successor games. They are as much a part of what we share across generations in this house as fairy tales, Looney Tunes, nursery rhymes, the Wizard of Oz, Sesame Street, or the Beatles.

Totally aside from desktop or laptop computing, anyone who carries a modern mobile phone, including my wife and I with our iPhones and our daughters with their Palm Pre handsets, is living with the legacy of Mac OS X. iPhones, iPads, and iPod Touches run a version of OS X (now called iOS) directly. But every other iPhone-inspired device, from the Pre to the latest BlackBerry to any Android handset, includes design elements, interaction cues, technical requirements, and user expectations set, in part, by Apple's decisions about how to build Mac OS X a decade ago. (Interestingly, Microsoft's new Windows Phone 7 seems to be trying something a little different.)

Mac OS X isn't the only influence, of course, but the screen of a freshly booted Windows 7 computer, Samsung Galaxy, iMac, Android phone, or Palm Pre looks more like that lickable, colourful, three-dimensional Aqua desktop from the Public Beta than it does the main screen on Windows 2000 or ME, a PalmPilot, Mac OS 9, an old BlackBerry or Nokia or Motorola phone, or OS/2.

A world where our viewscreens lacked heat-seeking red tortoise shells or pulsating, drop-shadowed buttons would probably still work just fine, but it would be a different one in many subtle ways.

It's funny that Sesame Street is what introduced me to television in the 70s, and it was sesamestreet.org that introduced my young daughter to the Internet.