Blown away by the grainy red Sun 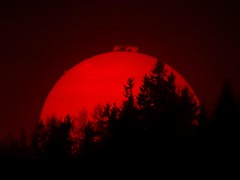 My dad has been an amateur astronomer since his childhood. The way my daughters have grown up around computers and cameras and musical instruments, I grew up around telescopes. And while most astronomical observing is of objects in the night sky, you can see some pretty fascinating things during the day too—especially if you want to examine our nearest star, the Sun.

To that end, a few months ago my dad ordered an obscure piece of gear, something I'd never heard of before: a custom-built personal solar telescope with a built-in hydrogen-alpha light filter. It just arrived, and he had a chance to try it today. Compared to his other optical equipment, it looks small and unassuming, almost like a large spotting 'scope. But there's a lot more going on inside.

I've been looking through his traditional telescopes with regular solar filters on them for decades. What you see there is a yellow-orange disc. Sunspots are easy to identify, but much of the rest of the Sun's surface is pretty nondescript in that view, much like what you can see through clouds or smoky air.

What I saw when I peeked through his new solar telescope, though, was astonishing. Instead of yellowish-orange, the Sun was deep red. Sunspots, rather than simple blots, had complex edges. I could see the granules that make up the solar surface, and at the Sun's edge, numerous spouting, filigreed prominences jetting off into space. Over time, those prominences changed shape, the way clouds morph in the sky. And this was not some digitally enhanced space-telescope image: I was looking at this stuff with my own eye, from the back porch.

The reason the solar telescope provides such a different view through the eyepiece is that hydrogen-alpha filter. While a traditional solar filter acts like a really opaque set of sunglasses, drastically reducing the intensity of all visible wavelengths of light so you can look at the Sun through a telescope without frying your eyeballs in their sockets, an H-alpha filter does so extremely selectively. Using some clever optical tricks, it lets through only a tiny range of colours, in a narrow band of red wavelengths surrounding 656 nanometres.

Those particular wavelengths are important because the Sun is a giant roiling ball of nuclear fusion, turning hydrogen into helium, and the 656 nm wavelength (more precisely, 6562.8 Ångstroms) is the primary spectral emission wavelength of hydrogen. That means that a lot of the interesting stuff that the Sun is doing (especially in its chromosphere) is visible at that wavelength, but normally it's hard to see because it's overwhelmed by the other light blasting out at all the other wavelengths, in the visible spectrum and beyond.

So what I saw through my father's small H-alpha solar telescope was a more active, detailed, seething star than I'd ever witnessed with my own eyes. The Sun is, of course, the source of all the non-geothermal energy here on Earth, the thing that keeps us and everything else alive. Watching it seethe in real time gave me new respect for that.

Holy cow! That's unbelievable. Cool explanation, too. Can your dad attach a video camera to this gear?

I'm not sure a video camera would work, but he does plan to hook up his DSLR, with which cool
time-lapse movies are possible, even using HDR techniques to give each frame more detail. If he gets to that I'll make sure to link to his images. All we need us another sunny day in Vancouver in autumn. Ahem.

By complete coincidence, Bad Astronomer Phil Plait just blogged about photographing the Sun in H-alpha too. Check out the pics there.

Wow! What a neat view. It's so close and we are so clueless about 'our' star. Looking forward to seeing some of your Dad's time lapse pics when we get some clear weather.

I am pretty sure you do not know me, but I want to say that your blog is one of the coolest ones that I visit regularly. I never know what I am about to learn on any given day! Good luck with everything that is going right and not-right in your daily existence, and thanks for sharing your world with me.