Cars used to be crap 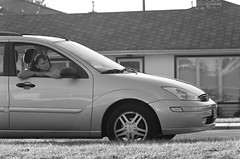 Continuing my anniversary theme, our Ford Focus station wagon left its factory almost 10 years ago. Many drivers don't notice it, but our Focus is a sign of how all cars have become way, way better in recent years, in pretty much every respect.

Despite being a decade old, and being parked outside that whole time, our 2001 Focus SE Wagon has no rust. We've maintained it, and it has needed some repairs, but overall it runs well. The interior's in good shape. With its cavernous cargo compartment, it remains our go-to car when we need to move stuff, even if I'm not schlepping a whole band's instruments and PA gear anymore. I just put some snow tires on it for the winter, since we still use it for most family trips where we need to bring a decent amount of luggage.

My first car, by contrast, was a beige, late-'70s AMC Hornet, which I inherited from my grandmother. It was also a station wagon, a model AMC called the "Sportabout." My Oma didn't drive—the wagon had been my step-grandfather's car before he died in 1981. By the time I took it over in the mid-'80s, the Hornet was the same age as our Focus is now, but it was piece of junk. The body was rusted through in several places, the driver's-side seat springs had collapsed (to be fair, my Opa was a big guy, but still), the windows leaked, the suspension creaked, the engine dripped oil, and at intersections, I often had to put it in neutral and goose the accelerator to keep the car from stalling.

While the Hornet had a 3.8 L inline six-cylinder engine, that motor only produced about 130 horsepower, and the car wasn't light, so it drove like what could best be described as a tubby land yacht. The Focus is a smaller, lighter vehicle, with a 2.0 L four-cylinder motor that produces the same 130 hp, so it's a lot peppier, and has a firmer, European-style suspension, so it's more fun to drive too. My wife Air's brand new Mazda3 sedan, with its 167 hp 2.5 L engine, is a step beyond that still.

I'm not sure exactly when consumer automobiles made the transition into this new generation of better-built, longer-lasting, more reliable vehicles. I'm guessing it occurred mostly in the 1980s, when Japanese and European manufacturers pushed their North American competitors to improve by outselling them with much better cars—and when onboard computers, electronic fuel injection, and other innovations allowed vehicles to diagnose and adjust things automatically that formerly required human intervention. (When we drove into the mountains in the 1970s, my dad used to adjust the engine timing under the hood for the thinner air. No one has to do that now.)

After a decade, that old Hornet was already a beater, and it didn't last much longer. (I was a young driver too, so I didn't treat it especially well, but it did get me to high school and university.) I drove a couple of other hand-me-downs from my parents—a Ford Fairmont sedan and a big Mercury Marquis V8 wagon, both also old-school designs—before eventually discovering what a modern car was like in my wife's two-door 1992 Ford Escort sedan. That was a fine little machine, but it was also too little—when our second daughter was due, we traded it for a similar 1999 Escort wagon, with four doors and storage in the back.

We might still have that Escort if it hadn't been rear-ended and totaled at a red light by a Mercedes in the summer of 2001. The safety systems did their job: my wife and kids were all inside when it happened, and their injuries were pretty mild considering the severity of the crash. The cargo compartment looked like it had been punched in by a giant fist, spraying glass throughout the cabin. Our insurance replaced the car, but by then the Escort had been discontinued, replaced by the Focus. The one we have now was the last wagon we could track down in the city at the end of that model year.

Oddly, Ford no longer sells a Focus wagon (or even a hatchback) in North America, so if we needed to replace it, we'd have to buy from someone else. That's a pity, because I see a lot of them on the road. It's obviously a useful design for many people besides us, and the completely new 2012 wagon looks great—but won't be available on this side of the Atlantic.

The focus funny enough shares a lot of parts with your new Mazda. I have always been pro Focus, sure it's styling is kind of dated now, but it is a great car and a true world car. I have always liked quirky cars and when the focus in it's world car form arrived in North America is was just that.
I have had some cars of questionable quality and design but they were fun and not the kind of Beige styling that seems to have taken over companies like Toyota. I had a poo brown SAAB 900s sedan, that hated any and all fuel pumps and heaters. A volvo 240d that had a rust hole in the floor that made it a flintstone car, and possibly the worst car that GM has ever sold the 82 Buick Skyhawk.
I was watching Top Gear as I do and they were discussing the Focus. It is a attractive car, yet it's styling is muted because we see so many of them. when they first came here they were almost exotic.

My dad often says that if you got 60,000 miles (100,000km) out of a car when he was a kid you were doing really well. These days you get rid of a car because you want or need a new one, not because you wear it out.

I remember an article I was reading several years ago about the new (at the time) Cadillac Northstar engine. The Caddy had 295 hp engine that was more efficient in every measure and much less polluting than the 1979, I think, Pinto, with its 4-cylinder engine that made about 75hp.

...but even recently cars have made quantum leaps in reliability and crap-less-ness. A car from 1992, driven 24000km a year, pollutes as much in two weeks as a brand-new car pollutes in a year. All of a sudden AirCare looks like a good idea...

My high school colleague Cris Dunbar points me to this crash test video between a 1959 Chevrolet Bel Air and a 2009 Chevrolet Malibu. The '59 loses rather badly.

Interesting take, and it's one that I noticed as well. I remember some of the early 80's car even that were junk piles. I think think the late 80's to early 90's was the time I noticed the improvements.