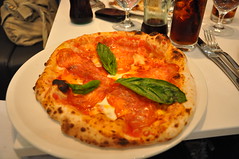 I don't know a thing about authentic Neapolitan pizza, or authentic pizza of any other kind. But I like pizza, a lot. Ever since I had my first one as a tiny child, from Me-n-Ed's Pizza Parlor in Burnaby, I've been partial to thin-crust pizza cooked in a very hot oven, with relatively simple toppings. In Vancouver, I'd never found anything that competed with Me-n-Ed's for the type of pizza I crave. Until now.

Bill McCaig, who opened Nicli Antica Pizzeria in Gastown last week, is a friend of our friends KA and Jeff, but I can say with certainty that I'd love his food whether I knew him or not. Nicli isn't a pizza parlor, or a pizza joint, or a take-out stand. It's a pizzeria restaurant, where you sit down with a glass of good wine, in a hip, bright, classy atmosphere, nothing like your typical Italian eatery or stainless-steel 99-cent slice outlet. The pizza also has little in common with anything else you'll find in this city.

Nicli doesn't deliver. In fact, they don't allow take-out: I'm not even sure they'll let you bring leftovers home. That's because each pizza is relatively small—about 30 cm across—made with ultra-fresh ingredients sliced right before cooking, and is baked in a unique (in Vancouver) wood-fired brick oven at a blast-furnace 900°F (480°C), for a mere minute or two. You must eat it with a half-hour or so, because it doesn't keep its distinctive character for long.

The crust is something else. Thin, yes, but both crispy and doughy, blistered like Indian naan (I chose to tear and fold mine while eating like naan too). While our party of six tried a variety of pies, we all agreed that the basic-of-basics Margherita showed off the extraordinary crust to its best. With olive oil, fresh tomato sauce, custom fresh mozzarella, and basil leaves, it's all you need. Even my kids ordered a whole pizza each (in the $13-18 range), and that was a good amount.

The restaurant pays attention to detail, and not just in its pizza. I ordered a Diet Coke, and it came in a chilled glass bottle with a tall glass full of ice. Even the washroom sink has its water pressure and temperature just right. Nicli took months longer to open than originally expected, in part because of the usual bureaucratic delays, and in part because nothing like its oven had ever been licensed before here, and it had to be separately inspected and certified. Bill and his crew have taken the time to do things right.

The prices are reasonable for a night out, and the $5 house glass of wine was a particularly good deal. Splitting a platter of antipasti and some dessert, plus drinks, we spent quite a bit more than you might expect when simply "getting pizza," but this is a far superior experience, and much better food.

And now I'm dreaming about that pizza: for the first time in 40 years, I've found a new one in Vancouver to crave. You should try some.

Hmmm, you describe the experience very well. I want to hop on a plane and come to Vancouver just to eat at this place.

Hey me too! I've just eaten dinner but my stomach is rumbling just reading about it. Can't wait!

Oh I love good pizza and atmosphere. Thanks for the heads up.

That's actually kind of how the pizza is in Buenos Aires. There's a big Italian influence here, and pizza is pretty much a staple in every restaurant. It's way simpler than back home, but still very enjoyable. Like your photo, often the basil and oregano (if they have it on the pizza) or in herb form right on top of the pizza. Jam and sweet peppers are also big, and every pizza has at least one olive on every slice.

Sorry, Jam is Ham - I was thinking Jamon when I wrote it, which is how ham is written here.

...which makes me think of the legendary jamón ibérico...