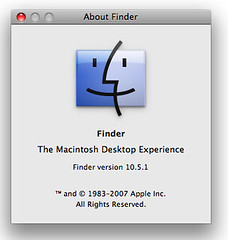 Robert and Dave are right. Macs don't work properly all the time. No personal computer does, or ever has, unless you get it into a working-perfectly-for-a-particular-task state and then don't change anything. Sound engineers and video techs who use their Macs (or PCs) to make money know that, which is why once they've got a system wired up and configured and working, they lock it down, keep it off the Internet, and avoid even innocuous things like bug-fix updates until they have a bit of spare time to tinker if something goes wrong.

We Mac-heads enjoy all those "I'm a Mac, I'm a PC" ads, but we know they lie. The new Mac OS X 10.5 "Leopard" breaks things just as Windows Vista does. People have fun with their Windows PCs (seen all those games?). My in-laws had their iMac lock up after playing a YouTube video yesterday, but they managed to sort it out without my help. The brand promise Robert talks about of Macs "just working" is true a lot of the time, but not all the time—and not in the way we expect of our cars or fridges or TVs or stoves or pacemakers or jet aircraft or roadways or electrical grids or dialysis machines.

It's also true that, despite the problems—and I've had a few—I enjoy using my Macs, and do find they stay out of my way, more than I ever did with any of the Windows or Linux (or DOS or Unix or Apple II or PDP-11 or mainframe) computers I've worked with over the decades. In part that's Apple's doing, in part it's the hard work of the people who design the Mac software I like, and in part it's my familiarity with the platform, because if I have a problem, I also usually have some idea how to fix it. (After working with Windows a lot, it's true for me there too, but not as much.)

There are reasons people like me have stuck with Apple machines even when they weren't very fast, or very cool, or even with any apparent future. It's not just running with the underdog either. I'm not impressed with some of Apple's behaviour recently in markets where it now dominates, such as the iPod and online music and video sales. But it is no shock: Apple has always spun its stories, and has always had a streak of hubris—a pretty wide one at that. I don't think many people would like a computing world where Steve Jobs beat Bill Gates in the early '80s.

Yet when I open the lid on my MacBook to get something done, it generally helps me do it, and seems friendly in the effort. Even if you don't see it as much anymore, the smiley face is still there in spirit.

I don't think a company has ever existed that hasn't lied or fibbed about something. They're pretty much like politicians in a lot of ways, and yes...that includes Apple. They're out to make money, no matter how cause-friendly they portray themselves.

I'm in the unfortunate position of having to use a PC at work, much more than I ever use my Macs at home. It's very true that my Macs (from my Classic II of 1993 to my current machines) have had their shares of "gotchas" that I've had to work through and troubleshoot, but I can say from my own personal experience that the PC is far worse in the problem-solution category. My PC at work often gets in my way, while my Mac usually clears the path to get some work done.

One reason I'm happy about many applications going web-based (from developers like Google) is that it takes Microsoft's substandard designs (my opinion) out of the equation; Google is making great, innovative products just like Apple, and Google's products work on any browser or computer the same way!

In my opinion, it's much easier to become a "power user" on a Mac versus a PC, because the organization of things just seems to be more logical and planned with some forethought. I guess I am what would be called an Apple "fanboy." I advocate strongly for the Mac, because it's just a better computing experience, and I feel my bias is warranted because of the time I spend (and still spend) working on a PC five days a week.

I remember when I bought my shiny Aluminum 15" Powerbook three years ago. I took it into the systems office at work, just because I knew it would get under their skin. I showed them the nice Aqua-based GUI and demonstrated Expose (with three different .mov files playing); then I said, "just wait, once Microsoft copies this...you'll have it too." And that very prophetic statement came to pass; Vista now tries, albeit poorly, to be OS X.

Microsoft and PC makers seem to only react to Apple (and Google); they seldom make Apple react to them, which shows me from where most of the tech innovation is coming, clashing strongly with the claims to the contrary.

Microsoft's biggest problem is that they became too big and powerful for their own good; absolute power corrupts absolutely. And the same thing can happen to Apple and Google, if they're not careful.

You are amazing. I love to read what you have written all the time. You have great insight into many going ons in the world. I have followed your blog for awhile now and love to check in to see what's new. It's hard to believe you are so optimistic about things, I could never be so lucky. Thank you for making my weeks a little brighter and I wish you the best life has to offer. Keep writing and I'll keep reading. I feel like I know you, at least a little bit, but just live to far away to come over and say "HI". Wish I could. Thanks again, Derek.