In Vancouver, the clouds cleared just long enough for some beautiful views of the lunar eclipse. I got some nice pictures (and so did my dad): 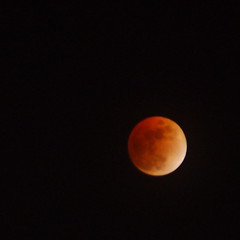 Mine were taken with a Nikon D50 camera on a tripod, and attached to a Sigma/Quantaray 70-210 mm zoom lens set at f/5.6, ISO 800, exposures generally between a half-second and two seconds. My dad took his with a Canon Digital Rebel XT attached to a Celestron C90 reflector telescope on a tripod, acting as a 1000 mm f/11 lens, with similar exposure times and ISO settings.

Love the layout. Happily, I got to see the eclipse after a brief bout with low lying clouds here in Seattle.

Look forward to seeing you at Northern Voice.