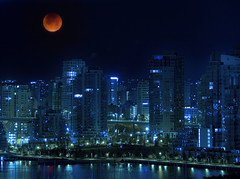 It's already started, and so far the sky only has a few clear patches here in Vancouver, but if you're lucky enough you can head outside in about 45 minutes and see a total lunar eclipse for the last time until late 2010.

Lunar eclipses are much more common than the famous solar kind, but they are also spectacular in their own way. The moon can turn a deep red colour and appear much more obviously spherical. As the earth's shadow crosses it, you can also see the curve of our planet, showing our own roundness.

So if your skies are clear and it's night where you are, go outside! Check out the moon going into the earth's shadow!

UPDATE: We had some lucky clear sky spots and I fired off a batch of nice photos.

I was taking the dog for a walk, looking over my shoulder at the moon from time to time, when Dizzy (the dog) found another dog friend in a neighbor's front yard. To my surprise, the neighbor had a telescope set up and we spent about 1/2 an hour looking at the eclipse up close and personal, while the dogs tired themselves out at our feet. It was an experience like I have never had and now have a new found love of the beauty of all things planetary.

I look forward to going back through some of your astronomy pics.