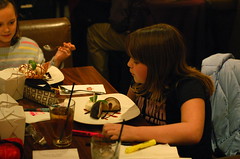 The stereotype is that children seem to grow up instantly, but that's not my experience. Our older daughter turned ten today, Valentine's Day. She was born the same day that Catriona Le May Doan won a gold medal at the 1998 Nagano Winter Olympics. Coincidentally, a couple of our good friends had their first child, also a daughter, two days ago. It occurred to me that by the time this new little girl reaches ten, my daughter will be twenty—the age I graduated from university.

The past ten years haven't, as the saying usually goes, gone by in a flash. They feel like ten years, really. And that's great. When my wife and I each held our friends' newborn yesterday, in the same hospital where our daughters (and I) were born, the little one's tiny sleeping face and delicious infant smell took us back to those early days when we first dove head-first into the sleep deprivation of early parenthood.

Since then we've had another daughter, now eight, and the kids have grown, learned to walk and talk and read and write and ride bikes and play piano, gone to preschool, made friends, started kindergarten, and now are in the second and fourth grades. They're learning math and spelling and have their own blogs and Gmail accounts. It doesn't surprise me that it took a decade to get here.

This spring also marks the twentieth anniversary of the day my wife and I first met, when we both worked as park naturalists for the Greater Vancouver Regional District parks department (now called Metro Vancouver Regional Parks). We were friends for a few years after that at the University of B.C., then lost touch until spring 1994, when we met again and started dating. By our first Valentine's Day, in 1995, we were already sharing a house and planning our wedding, which took place that August: 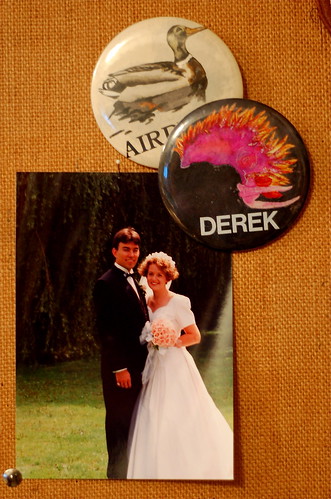 She's been my wonderful Valentine ever since, and I've never wanted another. Twenty years doesn't seem an unreasonable time since then either. We've shared and endured a lot together.

Simply being able to say "I met my wife twenty years ago" does make me feel a bit old, but I like that too. Grey hairs might or might not be a sign of wisdom, but they are a sign that I'm still alive. So 2008 is an important anniversary year, especially following the last one. Happy birthday to my daughter. Happy Valentine's Day to my wife. Happy one more day for me.

We think that your meeting Airdrie is a great gift to us, too. What a lovely, intelligent, attractive lady she is. Marina and Lauren are wonderful granddaughters. We are lucky to have you all living next door to us. The four of you are the "apples of our eyes".

What a wonderful post, Derek. Happy belated birthday to Marina.

What a lovely post. No coincidence that a duck and a sea slug gave birth to the ocean and a bay plant, I'm sure. The park naturalists are still in there. :)

Someone who works in a park to help explain and interpret what's going on there to people who visit. We also ran summer day camps for kids, conducted canoeing tours in the evening, and acted as guides at special event days at various parks around the region.

I second what your Dad wrote. You have wonderful parents as you know.
I've only met you wife once but I have a lot of respect for her. Your daughters are beautiful and seem so sweet. Everyone who knows you or reads your blog will also agree that you are pretty amazing yourself.

What you wrote was beautiful and so heartfelt.

I found out about your site from the book "Blogging for Dummies" (seriously!) and the author talks about how you blog about your cancer. I came over here to read about your story and just wanted to say that I will say a small prayer for you before bed this evening, for whatever good it will do. :-)