Tabloid magazines annoy me more than they used to 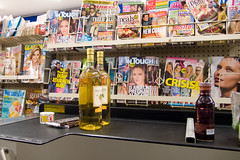 I know celebrity magazines and tabloids have been around for ages (here's a scandal sheet from 1957), and I've certainly seen them in checkout lines at the grocery store since I was a kid. But lately they—and a lot of their fashion and lifestyle magazine and TV cohorts—are really pissing me off. I think there are a few reasons.

First of all, they've proliferated wildly over the past decade or so, both directly (more tabloid rags) and indirectly (celebrity gossip appearing in other publications that didn't used to carry it, as well as on countless indistinguishable celebrity hack TV shows). Yet based on what appears on the covers, you'd think there were only maybe two dozen interesting people (Angelina Jolie, Britney Spears, and Paris Hilton, plus people who associate with or resemble them) in the whole world. It's an echo chamber.

Second, I have two daughters approaching adolescence now, and I can see how the relentless repeated messages from these sources could warp their perceptions of what is normal. My wife and I continue to point out the distorted perspectives as part of teaching our kids media awareness, but it's a fair bit of work.

Third is my experience over the past year, specifically with health and weight. Between the beginning of 2007 when I was diagnosed with cancer, and the end of July, I lost over 50 pounds. It's taken more than eight months to gain it back, sometimes requiring me to eat more than I actually want to.

Beforehand, I thought that my stable long-term weight of about 200 pounds (91 kg) was a little higher than it should be, but nothing to be too concerned about. Now 200 pounds seems like a lovely, wonderful weight, a healthy place for me to be, even with all my new lumps and bumps and scars from my treatments and surgeries.

So looking at the shows and magazines that are obsessed with the tiniest weight fluctuations and skin changes in celebrities grinds my teeth. These are trivial, pointless concerns—and what annoys me most is that it's not only obviously what sells, but it also invades my brain when I don't even want it to. Why is there even room in my memory for whether one or the other stick-thin actress has a pregnancy "bump"?

The magazines occasionally find their way into our house. I have occasionally flipped through them, usually in the bathroom. When I do, it's a physically unpleasant experience, like my soul draining out of my body. Ugh, and now it's turning me into a stereotypical grumpy complaining blogger too. See how poisonous these things are?

Perhaps you inherited the dislike of the rags from me - I think they are a total waste of resources, both mental and physical(how many trees are sacrificed and how much energy is wasted to produce them?).

If we want to help in our effort to go "green", getting rid of these tabloids would be a good start (perhaps their use in the bathroom could be extended to replace toilet paper).

Trust me, they're not. Don't ask why I know that, but they work a lot better than Entertainment Tonight.

I'm married to a woman who follows the lives of Angelina Jolie, Brad Pitt and Jennifer Aniston as though they were members of our family. My guess is that "nerdy guys" isn't the target market for this form of media. Then again, Tiger Beat has some interesting articles.

If only the celebrity drivel would stay in the tabloids. I don't like turning on my CBC newscast to hear Brittney's kids were taken away from her or that Paris Hilton is in jail. The celebritization of our culture is reaching alarming proportions.

I enjoy reading magazines like OK and In Touch. They are a good pick-me-up when I'm down, because I feel thankful for my anonymous life, and I feel blessedly normal.

Have you seen the photoshop disasters blog?
https://photoshopdisasters.blogspot.com/2008/04/93x-impossible-babe-of-day.html

Or the picture book meant to explain to kids about mommy's tummy tuck and nose job?
https://www.newsweek.com/id/132240/page/1