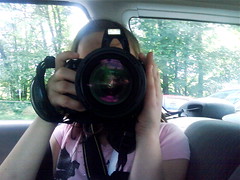 I get emails out of the blue sometimes, and yesterday a guy who found me via Flickr asked my advice on buying his first serious digital SLR (single-lens reflex) camera. He's already quite a good photographer, with a keen eye, and he's trying to decide between the Nikon D300 and Canon EOS 40D.

He likes the Canon's interface, but prefers the features of the D300, as well as the more vivid colours it produces (at least in JPEG mode). He wants low noise, good low-light performance, and good ability to take landscapes, high dynamic range (HDR) photos, and macro (closeup) pictures.

When you're starting out buying an SLR, what you're doing is committing yourself to a camera system, particularly with lenses. Chances are you will keep and use the lenses for much longer than you use that camera. For instance, I have a Nikon D50 I bought in 2006, but my lenses include a zoom that I bought in 1995 for my old film Nikon, and which still works great. I've been using Nikon SLRs since the early 1980s—had I chosen Canon or some other camera back then, I'd probably still be using that brand, just because of the inertia.

Both Nikon and Canon are good choices—but don't forget Pentax's K20D (Pentax provides some of the best values in both SLRs and quality lenses these days) and even Sony's A700 (Sony took over Minolta's camera business, and offers very nice Zeiss lenses too, some of the best available). I'm not a fan of the four-thirds system from Olympus and Panasonic/Leica, but you might like it.

The D300 is about 50% more expensive than the 40D (around $1800 Cdn vs. $1300 Cdn), so that might make the decision for many people. (The closest competing Nikon is actually the aging D80.) One way that price difference could affect your decision might be with lenses: if you can only afford an expensive body (like the D300) with cheaper lenses, you'd be better off getting a less expensive body (like the 40D) with better lenses like Canon's top-end L series. Again, the lenses will be around your kit longer than the body.

And for any camera you get, rather than buying yourself a standard zoom lens, I would recommend getting one or two good-quality prime (non-zoom) lenses instead. They are better optically, faster (i.e. have a larger maximum aperture letting in more light), and will also make you think about your compositions more carefully.

So I said to my questioner that if he doesn't have a brand preference for other reasons, and if he can afford the Nikon D300 with a quality lens or two, then I'd recommend it over the Canon 40D. The D300 offers excellent low-light performance, an amazing LCD screen (much better than anything Canon has), and lots of other features. Not that there's anything wrong with the 40D, but by most objective measures the D300 is superior.

It would be a pleasant luxury to be starting an SLR system from scratch, and to have maybe $4000 to spend on it. But no matter how you start, if you're a photography enthusiast, you'll get more lenses and other accessories (flash, battery grip, tripods, etc.) over time. Just don't cheap out with your lenses to start, and you'll be happier in the long run.

I have both a Nikon D3 and a Canon 5D, so I don't have any particular axe to grind, brand-wise.

The D300 is often compared to the much cheaper 40D, but it really should be compared to the 5D. In my book, the 5D wins hands down, no small achievement for a nearly 3 year old camera that is widely expected to be replaced at Photokina in September.

The D300 has better AF, faster frame rates, a better LCD. The 5D is a full-frame, a better viewfinder, and better image quality (sharper and lower noise). Don't be misled by Nikon's JPEGs, which use a low-pass filter on color information to give the illusion of better noise performance (because color noise is more objectionable than luminance noise which looks like film grain).

On the lens front, you forgot to mention the relatively inexpensive (for Zeiss) Zeiss Planar 50mm f/1.4 ZF for Nikon bodies, which beats the already good Nikon 50mm f/1.4 AF-D. The Canon 50mm f/1.4 and 50mm f/1.2L are superior to the Nikon as well, but not as good as the Zeiss. Nikon's sharpest 50mm is the f/1.8, but it has horrendous bokeh due to the crude 5-blade iris diaphragm.

I don't think the Pentax or Olympus are good recommendations for someone who may need room to grow in the future, due to the limited lens lineups, and the cameras just don't have enough market share to fund serious lens R&D. Sony is an interesting question. I boycott them personally because of their scumbag DRM policies, and their current lineup has atrocious high-ISO performance, but they could always get their act together.

Things are trickier at the low end to the middle of the pack, where Nikon's D40, D40x, D60, and D80 compete with Canon's XT (now discontinued), XTi, XSi, and 40D at similar prices.

The Zeiss lenses for Nikon (and Pentax) are no doubt excellent, but one does need to keep in mind that they offer neither autofocus nor full programmable control by the camera like other lenses. That's fine (in fact, probably good) for macro work, but could be an annoying throwback for general use. I wouldn't mind it in some contexts, but many other people would probably dislike it, no matter how good the optical quality.

I have a Nikon D70S, and my dad has a Nikon D300. That said, I am thinking that with the next camera I buy I may hand over my lenses to Dad and go for a Pentax. They seem to be pretty good cameras for the price, and I could use my old Pentax lenses (from a film camera) with it too.

Also, there's all this Nikon vs Canon hate war stuff. I got verbally attacked once for having a Nikon camera, by a Canon user! Like, geez, why can't we all be friends, my god is your god, etc. So I might be happier just leaving that cold war completely.

Actually, if you want to offend people seriously, buy a Leica, but use Voigtländer lenses on it.

Great post! I like the advice of buying a not so expensive body and save your money for lenses, until you need/can upgrade your body.

I should have that lens for the rest of my life (as long as I dont damage it). Where as my camera body needs to be upgraded soon I think.