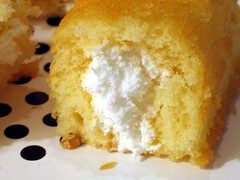 Anyone who's ever eaten a Twinkie remembers the experience, even if it's been years. The textured, firm, sweet dough combined with the intense vanilla creme (not cream, mind you) filling is distinctive and, especially when you're a kid, delicious, yet obviously somehow sinful and wrong and unnatural at the same time.

While I was in hospital last week, my wife brought me Steve Ettlinger's book Twinkie, Deconstructed (buy using my affiliate code at Amazon Canada or U.S.A.). It's a perfect "Derek's sick" book: a sort of "science lite" non-fiction tome that's fascinating, informative, and non-polemical while still making a political point. I finished it in a little over a day.

The concept is brilliant. Prompted by a question from one of his kids, Ettlinger, a long-time science and consumer products writer, tells a story of traveling around the world to find out where each of the dozens of ingredients in a Hostess Twinkie comes from—in the order in which they're listed on the package. In doing so, he visits a lot more factories than farms, and encounters many more industrial centrifuges than ploughs.

Some reviewers think that Ettlinger got co-opted into the "Twinkie-Industrial Complex" (as he calls it) during the writing of the book. They think that he is too accepting, too uncritical, and indeed too friendly to the various large corporate interests who show him (or, in many cases, refuse to show him) around their facilities and processes. But I think he's smarter and more subversive than that.

Here's something from page 195:

In an undisclosed location, perhaps in an industrial park near Chicago, maybe in rural, central Pennsylvania, possibly in riparian Delaware, in a plant full of tanks, railroad sidings, and a maze of pipes and catwalks, big, stainless steel vats are filled with fresh, hot, luscious, liquefied sorbitan monostearate.

Or check out this label-text Kremlinology from page 255:

...while it seems that not one natural color is use in Twinkies, sometime the label has said "color added," which would make me suspect that annato, the butter and cheese colorant that is popular with [Hostess's] competitors, is indeed in the mix. But their punctuation indicates otherwise. "Color added" is followed by "(yellow 5 red 40)" which would seem to indicate grammatically that they are the only colors involved.

One of the most obvious stylistic effects throughout the book is that whenever Ettlinger first mentions a trademarked product, he adds the registered trademark symbol: Yoo-hoo® Chocolate Drink, PAM® cooking spray, Clabber Girl®, Davis®, and Calumet® baking soda, and so on. Normally you'd only see things written that way in a press release or corporate brochure.

You might think he was simply pressured by company lawyers, but when I read the book every trademark symbol seemed to me like a wink from the author, an unavoidable reminder that while he's breezing along in his personal, gee-whiz style, he hasn't forgotten that the process of Twinkie-making is huge and industrial, one that has only a little to do with baking and nourishment, and a lot with multinational chemical firms and drill rigs and mines and massive tract farms.

Twinkie, Deconstructed is no Silent Spring, or even Super Size Me. It's neither a manifesto nor a satire. It's not horrified at what Twinkies are made of—because ingredients originating from petroleum or minerals rather than food plants or animals is part of the Twinkie legend. What's surprising is only how far some of those ingredients have to travel, and how extensively they have to be mangled, reprocessed, ground, dissolved, flung, and dried before they get used in even minute quantities to bake those little cakes.

Ettlinger's book is, I think, more effective because he doesn't politicize it overtly. He simply tells us, repeatedly and relentlessly, about conveyor belts, pipes, pressure vessels, railroad cars, noxious chemical reactions, huge stainless steel tanks, monstrous earth-moving equipment, and what obviously must be enormous quantities of energy used in all those processes. He talks just as blithely about factories that refuse to tell him where their ingredients come from at all as he does friendly chemical engineers who show him around less secretive facilities. You can draw your own conclusions.

I did find myself wishing, at the end, that he had calculated how much energy a single Twinkie consumes in its manufacture—how much oil or coal or gas, or how many kilowatt-hours of electricity, it takes to bring all those ingredients together. And I was surprised that, after nearly 300 pages of background, Ettlinger never actually describes step-by-step how a Twinkie is made at the Hostess bakery.

But Twinkie, Deconstructed is a fun read. Whether you feel safe eating a Twinkie afterwards is a message you can safely infer from the book, rather than having to be clubbed over the head with it.

Interesting, makes me want to grab a copy. Your review is very well written.

If I bring you (fresh-baked, not made in a factory though the ingredients are) cookies will you let me borrow your copy? I'm sort of curious, but I don't like cluttering my apartment with more books I may only read once at most.

I'm wondering if reading stuff like this will help me with my food decisions, because lately I've been eating too much processed stuff.

Sure thing. You could borrow it even without the cookie exchange, but we won't say no!

I have to say that this is my favorite review! I especially liked that you got the "wink" which is indeed the case...

And I've been unable to dedicate the time to figuring the carbon footprint of Twinkies. I'm kind of hoping some graduate student will make a project of it.

Thanks for your enthusiasm.

Thanks Steve. The trademark symbols reminded me of a similar technique in Douglas Coupland's early-'90s novel Shampoo Planet. In that case the brands were made up, but the effect is similar: as a reader you feel a bit uncomfortable being hyper-aware of them.