A few weeks ago, I replaced the old wireless router in our upstairs den with a new Apple AirPort Extreme base station, which has generally worked great. One extra benefit of the design is that, like Apple's similar Time Capsule, I can use it as a wireless backup device device by hooking up an external USB hard disk, like this: 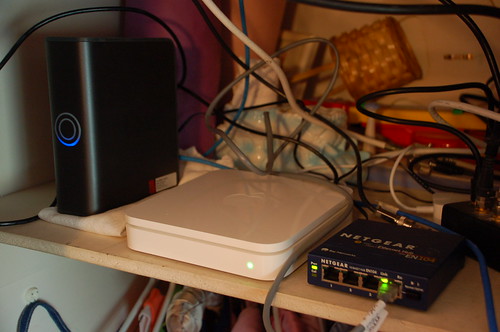 The disk I use is a 500 GB Western Digital MyBook, perched to the left of the base station itself. If you look closely at the photo, you'll notice that the disk enclosure is sitting on a folded cloth napkin.

Here's why. The shelf all that networking gear sits on is made of light wood, and sits loosely on a wooden lip around the edges of the inside of the den closet. The other side of the closet's back wall is the south wall of our bedroom.

So, after I set up automatic backups for our various Macs using Time Machine and other tools (apparently not officially supported in this setup, by the way!), whenever the hard drive was active (especially at night), our bedroom wall would rumble disconcertingly as the disk mechanism chugged away. The shelf and the closet drywall were acting as a big soundbox amplifier.

And so, the napkin, my half-baked attempt to damp down the vibrations from the disk mechanism. It sort of works. Now, when the drive is active, the wall makes something more akin to subtle stomach-growling noises, rather than louder rumbling. During the day, that's fine, but at night it's still prone to keeping us awake.

The temporary solution has been to make sure backups occur during the day when it doesn't bother anyone. But I still must unhook the USB drive at night to avoid the grumblies, during what seem to be random administrative disk accesses (perhaps search indexing) that occur anyway from time to time. But I'd rather not do that. I'm considering putting some foam under the edges of the shelf itself, or maybe moving the whole setup to different, less resonant part of the closet.

Wow, this sure is a first world problem.

And the most surprising element to me, is that I understood almost 80% of what you wrote :) Yay for geekery!

What about a piece of neoprene? an old wetsuit or something like that? There are even some neoprene-like mousepads, but they're more dense than good ole wetsuit neoprene and probably just transmit vibrations through it.

I think that I have just the thing for you - foam pads which I use for shipping. They are 20cm long 13.5 cm wide 3.5cm thick. Come on over, they're sitting on the kitchen table.

It's also a White Whine: https://whitewhine.tumblr.com/

I love this computer geek talk.