Time for a new Wi-Fi router

UPDATE: Yup, the AirPort Extreme Base Station worked like a charm. Back to normal now.

Evidence indicates that it is indeed our wireless router at fault for the slug-like behaviour of the Wi-Fi networking in our house. I think this will be a good excuse to purge the ungainly stack of networking gear... 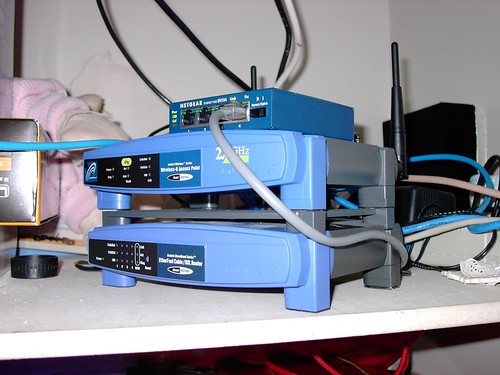 ...and replace it with a single wireless router that can do everything with fewer wires and, with luck, less general flakiness. Some of that stuff is only 10BaseT or 10Base2 speed, and has been blinking away in our den closet for a decade.

Yeah, we are in a similar position. Our wifi router is dying a slow death. Oh it works (now) but is becoming less reliable each day. The signal is getting weaker and needs to be reset about twice a week now.

One thing I will be paying attention to this time will be new ethernet cables when I do. Mine are old and I suspect that they might be part of the problem. Of course, the lure of faster internet is enough to upgrade my router either way.

BuyTime Capsule and you'll never look back. Or back up again!

I plugged a USB hard drive into the AirPort Extreme, so it does the same kind of AirPort Disk wireless backup.