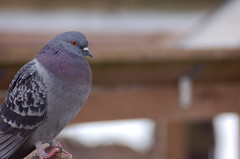 The city of Burnaby, B.C., where I grew up and live, is just to the east of Vancouver itself, and is well known for a significant amount of parks and other green space for such an urban environment. One part of that is Burnaby Lake, a fairly large and extremely shallow wetland in the centre of the municipality.

The lake sits in Burnaby's central valley, and forms part of a waterway that starts at Trout Lake in Vancouver, runs east along Still Creek through Burnaby into the lake, and out into the Brunette River, which flows east and then south through Coquitlam into the Fraser River, which empties westward into the ocean. In recent decades governments have dredged the lake several times, both to provide enough depth for competitive rowing and to avoid having excessive sediment from development and the city's storm sewer system turn the lake into a mudflat—which is why the water's edge is so sharp in the satellite photo. 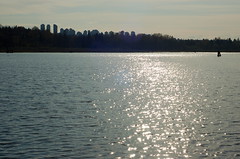 My wife had the great idea of taking the kids on a ten-minute car ride down the hill from our house every few days to check out the waterfowl and other birds, and to see if any chicks have arrived yet this spring. So far they haven't. But there are tons of animals and plants there, from birds such as ducks, Canada geese, crows, and pigeons to carp, frogs, squirrels, and even a significant population of beavers, the world's largest rodent and Canada's mascot.

She's gone down there with them a bunch of times, but this weekend I was feeling well enough to tag along. And a couple of days ago the sunny weather and abundant animals brought out another example of local wildlife: the Canadian wildlife photographer, whose distinctive plumage and plaintive ktsch-ktsch-ktsch-ktch call (known affectionately as the "shutter-and-mirror-slap") were in fine form down at the Piper Spit pier. The next day we visited again (this time one of the girls' school friends joined us), but our bunch was alone because of the cold and rain, which actually turned to snow briefly. 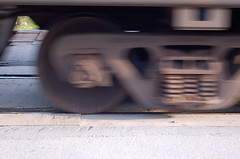 The entrance to that part of the park also crosses some railway tracks, which our daughters enjoy putting pennies on to see if they'll be flattened by passing trains. We're accumulating quite a collection of thin copper ovals now.

Exactly 20 years ago, in April 1988, I was working a summer job as a park naturalist, headquartered at the nature house at this exact spot, between the railway and the boardwalk. That job was where my wife and I first met. We led canoe tours of the lake some evenings (no motor craft allowed), and this year we're thinking of getting a canoe and taking our kids out there too.