Out there havin' fun at the Vancouver Sun Run

As I mentioned a few days ago, my band The Neurotics played, for the 15th year in a row, at the Vancouver Sun Run, which as of this year appears to be the largest fun run in North America. There were over 59,000 registrants for the 2008 race.

As part of the photos I took downtown today, here's me behind the drum kit, with Swingy Neurotic (a.k.a. Doug Elliott) on bass: 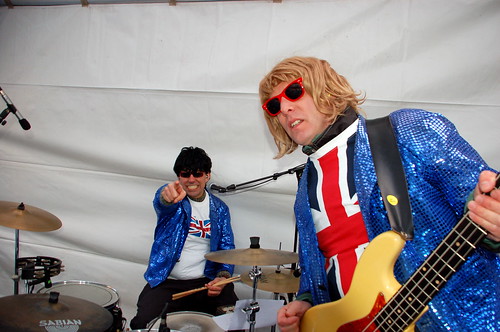 Thanks to Dilly Neurotic (a.k.a. Sean Dillon) for snapping that one. We all look a bit chubbier than usual because it was freaking cold for late April in Vancouver (just above freezing), so each of us had at least three layers of clothes under our costumes—I was wearing a T-shirt, a long-sleeved shirt, and a chunky sweater underneath my Union Jack shirt and glittery jacket.

You could be heard clear across downtown! Even heard the announcer say "Let's hear it for The Neurotics!"

Wish I could of been there to here you guys ROCK! But I was stuck in beautiful sunny southern california. Sigh.
Kelly

Derek,
You guys were 'Takin care of business' that day, for sure. Thanks.