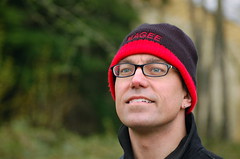 As part of my slightly twisted effort to use my cancer treatment as leverage to get me the kind of exposure and fame my more modest general talents haven't done, I was interviewed on Wednesday for the show "Spark" on CBC Radio (as I've already flogged).

You can now hear the full-length talk between me and the always sultry-voiced Nora Young—a voice made even huskier by her fighting a cold at the time. Here's a direct link to the MP3 file (24 minutes, about 33 MB) too. I'll probably link that up at my podcast after the edited version goes to air next week.

I like that "Spark" doesn't have the traditional media attitude of holding on to its source material like a state secret. It's unusual enough for a radio or TV program, publicly funded or not, to post full-length versions of edited interviews online. But to do it days before the final version appears is still more innovative. I'm not sure I'd even do that.

I listened to it last night, and it's a great interview. Now the question I'm asking myself is how I coulda got bladder cancer and not even bumped my Technorati authority, and you get to talk to Nora (Hubba Hubba) Young.

Internetfamousness is a capricious beast, Bob.

I've often wondered about some kind of "lifedrive" (LDD) that we could purchase with a guarantee it would keep our digital lives safe and accessible.

Sultry. I knew that my adjectives weren't working when I posted about your interview with Nora Young. All I could say was that your voices sounded great. Hmmm... Back to the thesaurus for me!

Interesting, as always. And, btw. thanks for posting about Randy Pausch in the first place and mentioning him again in the interview. He's truly remarkable.

Darren points to Legacy Locker, which is a start (though how good a one is an open question) to dealing with our digital legacies after we die. Dave Winer also had some interesting ideas about "personal endowments" back in 2007.