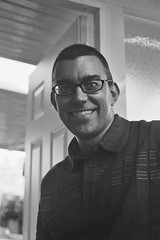 It's been close to two months since I last had a chemotherapy treatment, after about seven months of if every two weeks. I've been grateful for the break: other than the old bowel-blockage thing last month, I've been feeling pretty good.

There remains no evidence of any recurrence of cancer where surgeons removed the major tumours from my intestine exactly a year ago. However, the metastatic lesions in my lungs—there are four, created when cancer cells made their way through my body and somehow took root there—continue to grow very slowly. They are all small, the largest one being only 1.4 cm across, less than the diameter of a dime.

But that's still too big, and slow growth is still growth. So starting tomorrow, we're attacking it with one of the same old chemo drugs (irinotecan, a.k.a. Captosar) and a new one (panitumumab, a.k.a. Vectibix, manufactured by Amgen Pharmaceuticals). I'll be taking them intravenously every two weeks for some time to come—how long depends on whether they are effective.

This is a clinical trial, a scientific study, so the first and second treatments with it will be time-consuming: on Monday I have to be at the clinic at 9:00 a.m., take a blood test, have the treatment, and then have more blood tests one hour, two hours, four hours, six hours, and eight hours later, so I won't go home until 8:00 p.m.  And then I must come back around 11:00 a.m. for the next three days for more blood tests. Then, two weeks later, the same thing.

But after that it will simply be the treatment every two weeks, and this time I don't need to use the "baby bottle," so that will be a relief. I hope that the side effects won't be too bad. Apparently I am likely to get some skin rashes and pimples within a week or two, but that might be the worst of it, other than the usual short-term nausea and longer-term hair loss. (And my hair has been coming in so nicely too.)

And I'm sure a lot better than I was a year ago!

I'm a BC lad too up in Prince George.

Being a former drummer myself, I found your episode on the Lab great. I've always wanted one of those digital kits. I dunno what my wife would say...(or she'd probably just kill me)

Thanks for re-running the episode Derek :)

I'm following your twitter now. Please notify us with your latest & greatest photos with that sexy Nikon :)

My best wishes that this round goes well. Keep fighting.

I hope you side step the nasty side effects and that the treatment is effective. take care.

The side effects mean the drugs are doing something, so I hope I don't avoid them altogether.

I hope you rock the treatments, dude.

Hope it all goes okay. x

I hope things go well with this round of chemo and the experimental drugs.

hope this round goes as well as it can--you're so tough, reading your blog really puts me in my place whenever i'm feeling whiny about my tummy. always a good reality check that my level of discomfort is truly manageable!

Well, here we go with the skin rash side effects a little over a week later (beware, pimply photo after the link).