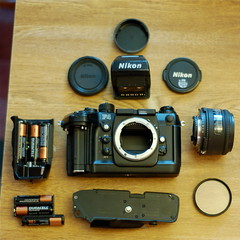 Yesterday I got an online notice that my eBay purchase Nikon F4 film camera had cleared Canada Customs. I thought that might mean it would take a few more days to arrive, but the Canada Post truck showed up with it this afternoon. I made some camera nerd unboxing photos with my digital SLR if you'd like to see them.

I have to say this: wow. For a 20-year-old design, the F4 is an amazing camera. It weighs a ton, because it's both huge (freakin' huge) and made of thick metal under the rubber covering, but it feels great in my hands. It's remarkably responsive, easy to figure out for anyone who grew up with the dials, knobs, and buttons of an analog SLR, and fast.

I'd also forgotten what it's like to look into a bright, full-frame, 100%-coverage viewfinder with minimal clutter. Compared to the finder view in my D50, it's expansive, and having only one central autofocus point plus a couple of etched circles (to show where the different types of light metering act) means there's a lot less other stuff busying up the view. 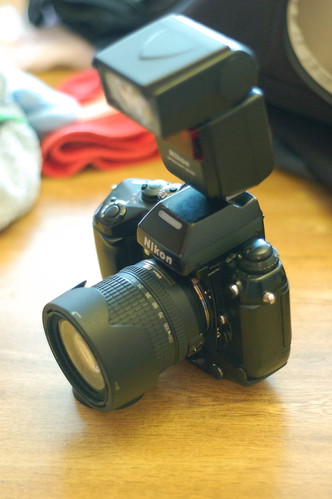 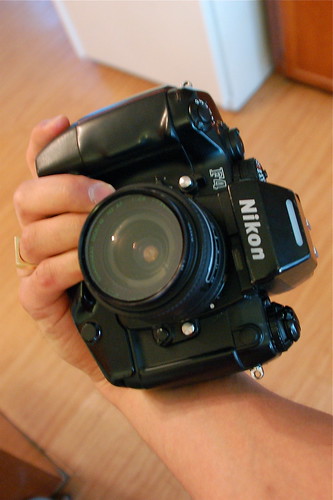 All my Nikon-mount lenses fit and work—even ones with technology designed more than a decade after the camera ceased production—although the newest, designed for a smaller digital sensor and lacking an aperture ring, is limited and vignettes heavily. Most surprising, my SB-600 flash functions pretty much fully, including reading lens focal length, working with through-the-lens (TTL) metering, and acting as an autofocus illuminator (which the camera otherwise lacks).

Running the motor drive at top speed yields a full paparazzi kssht-kssht-kssht-kssht-kssht, much faster than my lower-end D50 digital SLR from 2006. Autofocus is surprisingly quick too, though not up to complete modern standards. Unlike my D50, the F4 has mirror lockup, dedicated buttons for exposure and focus lock, depth of field preview, and an eyepiece shutter on a removable viewfinder pentaprism. 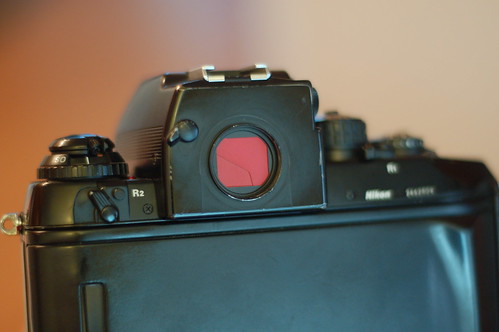 I loaded the F4 up with some Ilford black-and-white film and took it along while my younger daughter and I walked to the store and the park this sunny afternoon. I also picked up a new camera strap at Kerrisdale Cameras, since none of my current ones have the keychain-style metal rings at the ends that work with the F4's teeny tiny metal strap connectors. And I'll have to track down a rubber eyepiece ring, since that's the only stock item missing from the camera.

Of course, the key frustration with any film camera is that you can't see your pictures right away—I'll have to wait to finish the roll and get it processed, just like I did my entire picture-taking life from childhood until I bought my first digital camera in 2002. And yet that also forces me to think a bit more: How will this look in black and white (for this roll)? What's the best angle for this shot (I can't waste film trying a bunch of different ones)? What works in this light at this film ISO setting (since I can't adjust that)? What kind of depth of field and shutter speed do I want? And so on.

Perhaps the greatest pleasure comes from something I haven't had in more than 15 years: an SLR camera with analog controls for every feature, not multifunction digital buttons and mode dials and four-way controllers and LCD screens. Other than the lack of a manual film winding lever, and the info LCD inside the viewfinder, the F4 has the same kind of excellent tactile controls and analog displays photographers relied on for decades, from the first Leica rangefinder shooters to the astronauts walking on the moon.

There's definitely a difference adjusting the lens opening with an aperture ring on the lens, and the shutter speed with a dedicated dial on the top of the camera, than with the one or two thumbwheels on the handgrips of modern digital (and even film) SLRs. In the digital era, only the otherwise imperfect Panasonic Lumix DMC-L1 and Leica M8, with their retro aesthetic, offer anything like that.

Obviously, I don't have any of my photos from the F4 yet. But I'll link them up when I do.

Well now I'm looking to buy an F4; just curious to know if I buy an F4S can I remove the battery pack and slip it down to F4 size?

Yes, but you'll either need to find a small-size F4 (non-s version) to start with or get the smaller MB-20 battery grip separately (for more money) and swap them. I haven't bothered and just use the big F4s with the vertical grip.