Gnomedex gets back its mojo 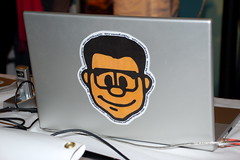 Last year there were worries that the annual Gnomedex conference in Seattle might have lost some of its mojo. This year Gnomedex got its mojo back. Several 2008 sessions, for instance, blew away my bedridden 2007 remote-video appearance, which I'd heard some people had then considered a highlight. (Yikes.)

Rather than write out a big summary (you can read what others had to say), here's what I was chatting about on Twitter before, during, and after Gnomedex 8.0 with various people. The @ links are Twitter's way of letting you target your messages to other Twitter usernames. The #Gnomedex tags are there so that search sites know that various Twitter messages ("tweets") are about Gnomedex. You can probably ignore both and still get the point:

Gnomedex 2008 was a remarkable and refreshing forum of ideas, which is the best anyone could ask for. I also won a cool prize thanks to Eye-Fi and Chris and Ponzi Pirillo, and they played my Gnomedex song at the end. Yay!

P.S. You know who'd be cool to have speak next year? One of the MythBusters crew.