I'm sure that Old Navy (being part of the Gap/Banana Republic clothing empire) has some excellent lawyers, who must have had giggled a little when they checked out, and then approved, these hoodie designs I saw for sale last week at the store: 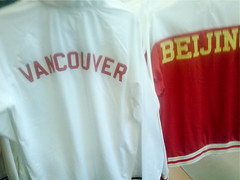 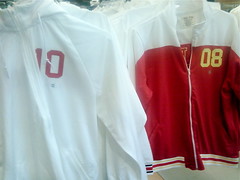 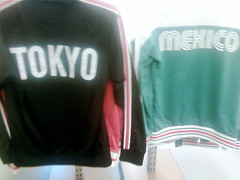 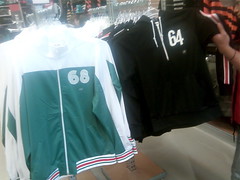 They're some reasonably funky retro Olympic track tops commemorating selected cities that have held or will hold Olympics over the past few decades (Tokyo, Mexico City, Los Angeles, Beijing, Vancouver). Except they're not, really. Old Navy is not an official Olympic sponsor or licensee. There are no Olympic logos or anything on these items of clothing, and the designers were careful to avoid even trademarked phrases, such as "Vancouver 2010."

Instead, you get a hoodie with "VANCOUVER" on the back and a simple "10" on the front, plus "BEIJING" and "08," "LOS ANGELES" and "84," "MEXICO" and "68," and "TOKYO" and "64." Simply commemorating a city and a number, see? Any Olympic association is purely coincidental, of course. I'm particularly impressed with the groovy lettering for Mexico, which cheekily apes the famous psychedelic '68 Olympics logo (scroll down at this Olympics branding site to compare). The Tokyo lettering is pretty similar too.

This might be an example of The Man thumbing his nose at The Man, but I have to admire the effort Old Navy expended to nearly, but just barely not, infringe on Olympic copyrights and trademarks. Given that, in many cases, very little of the billions of dollars that the IOC rakes in from sponsorships and licensing seems to go to the athletes themselves, I don't mind having a chuckle at it either.

Call me an idiot... but browsing through an Old Navy, I never would have put together the cities and the numbers, even in an Olympic year. And I wonder how many men (assuming this is in the men's section) would say the same as me. Very sly though...

Buzz Bishop reports that "old navy got rapped by the VANOC [Vancouver Olympic Organizing Committee] police on those awesome track jackets. They are no more."