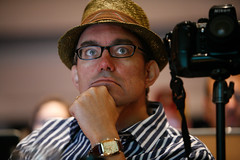 I haven't cried for awhile. Back when doctors first found my cancer, more than a year and half ago, I cried frequently. Later in the year, after I'd been through chemo and radiation and surgery and catastrophic weight loss and side effects, I would sometimes wake in the night and sob in my wife's arms, "I don't want to die."

I still don't, and I still have cancer. I'm still taking chemotherapy every two weeks, lying in bed for a couple of days and throwing up. But it has become a grinding routine, a long, protracted war against my body's own mutant cells, rather than a fierce battle.

I wish I cried more. I'm not holding it back. When it comes, crying is a great relief. I feel alive.

But I think I'm a bit numb to the threat of death now—I could still die soon, but it seems less likely, since my medical team and I seem to be fighting the disease decently, and I feel pretty well most of the time. My family and I talk about the future, and such talk no longer seems hollow.

I also laugh, especially with my kids, and my wife, and my band. I played another show with them this afternoon, and one thing I enjoy best about it is that pretty much every show, I laugh uncontrollably at least once about something.

"...my medical team and I seem to be fighting the disease decently, and I feel pretty well most of the time."

Oh Derek, I am so happy to hear that. Here's to your health!

Here's to feeling alive and being alive! Let the tears roll... we're meant to cry.

I've been reading your blog for over a year now and there's no one I find more consistently alive to the world. You reinforce for me the idea that life is not to be taken for granted. None of us knows how long we have. We can only use each day as well as we can. Stay well and keep writing!

You are inspiring, and you are awesome. And I'm glad that you are laughing more often.

I agree, crying is cathartic. I wish I could do it on command!