Still a sexy beast, if a little addled 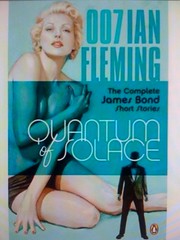 The iconic James Bond "shoot at the camera" montage doesn't appear until the end of Quantum of Solace, and that's a good summation of the whole movie: it's fun, but things aren't quite in the right place. In fact, by the time it's over, it seems a bit like a Bond movie trailer that lasts almost two hours.

A couple of years ago I raved about Casino Royale, Daniel Craig's first Bond appearance. Quantum isn't as good. It strays too far into Jason Bourne land, where the fights are all dizzying intercuts, the scenes flit around the world almost randomly (Italy, Britain, Haiti, Austria, Bolivia, Russia...), and the various secondary players are so corrupt that there's nearly no one left to root for. There's something emotional missing, and by the time it's over you wonder a little what most of the movie had to do with Bond's end goal.

I'm not saying I didn't like the film. Craig remains extraordinary in the role, steely and taut. There's a lot of clever editing, implying what happens rather than showing it. The action scenes—including chases on foot, in boats, in cars, and on aircraft—spark with energy, even if they occasionally confuse. By the end, you know more about why Bond is who he is, and there's a nice little joke about Canadians, presumably by Canadian lead writer Paul Haggis. Overall, my wife and I enjoyed it.

But next time, the filmmakers need to go back to Casino Royale and figure out why that movie didn't just spark, but was refreshingly, blazingly on fire. They have a good thing going, but they've got to keep it going.

Really? You realize about this movie, it is the "2nd" part of a 3 part Story, maybe even longer now.

It's not a "Go after the bad guy who has the undersea weapon/Space Shuttle/ Big Blimp/ Golden gun, Thingy.

They are now just discovering this group called "QUANTUM" nobody even knew they existed, and then to find out that even your bodyguard of 8 years was in the organization?

This movie was filler to move on.

I liked the way the shot the action, especially the scene in the Opera, Now I have to go see this opus..
;-)

A film needs to stand on its own merits, regardless of whether it's part of a series. I agree that the opera gunfight was particularly well done, and quite different. But overall, the new movie is not as good as the last one.

I agree with you, Derek. Even if a movie is part of a trilogy, it should be able to stand on its own. I haven't seen it but the sense I get from talking to people is that it's not that kind of movie.

Although I haven't seen QoS yet, I totally agree with you about the Bourne comparisons based on Casino Royale.

It annoys me that they've taken the character into this territory. To me Bond was never about fights, he was above all that stuff wherever possible... smooth-talking and sneaking his way in & out of situations and using his gun and fists only when cornered. Probably explains why he was always getting caught & strapped to laser cutting tables & shark cages so much!

I think the Casino Royale update to Bond was just about perfect. Read the original novels and we was the kind of loner tough guy Craig portrays. Quantum of Solace maintains that, plus strong direction and acting, but the plotting and dialogue are seriously lacking. They need to fix that next time.