Where you once belonged 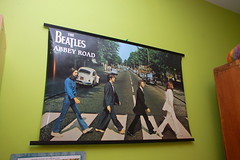 After linking to the excellent Playing The Beatles Backwards review a few days ago, I've been listening to their stuff again with a fresh ear, especially to some of the less famous tracks. And though I've been playing Beatles music in a cover band for over 20 years, they still blow me away.

Think about this: those four lads recorded Rubber Soul in less than a month, releasing it near the end of 1965. Then Revolver followed eight months later. Sgt. Pepper came ten months further on. So they recorded and released not only their three best albums, but three of the best rock albums of all time, encompassing at least a dozen of the greatest songs—all in a year and a half.

Oh, and they managed to put out a few singles you might have heard of during that time too: "We Can Work It Out," "Day Tripper," "Paperback Writer," "Rain," "Yellow Submarine," "Eleanor Rigby," "Penny Lane," and "Strawberry Fields Forever." Several of them didn't even appear on the albums. They were bonus songs.

Forty years on, it's easy to forget the almost thermonuclear burst of musical creativity The Beatles offered the world. Their recording career lasted from "Love Me Do" in mid-1962 until "I Me Mine" (from Let It Be) at the very beginning of 1970, a little over seven years. There's never been anything like it, before or since.

My older daughter watches MuchMusic and has me put on Top 40 radio in the car, but given the chance, she'd rather listen to The Beatles anytime, and their posters adorn her walls. The first few notes of "I Saw Her Standing There" can still bring a crowd to their feet dancing. "A Day in the Life" can make them weepy. "Hey Jude" will get them swaying. The Beatles, who did almost everything before I was born, still make me glad for the existence of music.

Talent aside, Malcolm Gladwell says the Beetles are so damn good because in 1960 they were lucky enough to be invited to Hamburg Germany where they played in a club 7 days a week. On their first trip they played 106 times. By 1964 they had played live an estimated 1200 times. Apparently most bands don't play this much in their entire careers. Gladwell calls it the ten thousand hour rule- the amount of time you have to spend doing something to become exceptional at it. He says it's the combination of luck and hard work that set apart the successful elite from the merely talented.

Yeah, it blows my mind that not only did The Beatles put out 3 great albums in that time, but they were so stylistically different from each other. It's like watching the evolution of music, but sped up by a factor of 10.

My favourite album off Revolver is "Tomorrow Never Knows". I like to use it as an example of electronica/techno, to show that it's decades old, and not something that showed up in the 90s, say (I'd use Stockhausen but I find people are more likely to have heard of The Beatles).

Gladwell has a point (which, as with much of his work, seems obvious in retrospect), so it was a combination of luck, talent, timing, hard work, and other factors that made The Beatles what they were. That doesn't diminish their achievement, only makes it more remarkable. Their appearance was contingent on many things, like any significant historical event.

Last year I wrote about that, where I wrote:

"[Gladwell's] main [point] is that many inventions and scientific discoveries happen because the time is right. [On the other hand,] without the Beatles there would still have been some kind of rock and roll after Elvis, and maybe even psychedelia in the '60s. But there wouldn't have been Sgt. Pepper."

There was an interesting play back in the early '90s (I think) that speculated about what would have happened had The Beatles broken up after their first couple of hits. In that scenario, rock 'n' roll was a fad that faded, Paul McCartney became famous by changing his last name and turning himself into a Broadway-style songsmith, and the rest of the guys remained obscure.

I've listened to some beetles song (strawberry fileds) and others and the lyrics make no sense. They must have been high.

You know, they might very well have been. What a revelation! :)

Derek, have you seen this?

What if the Beatles had been Irish?