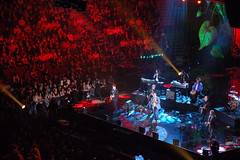 Last night my wife and I went to the Juno Awards (Canada's English-language music industry awards, like the Grammys) at the GM Place hockey arena here in Vancouver. We were waaaay up in the rafters, but still had a decent view. However, one of the ushers told me the lens on my SLR camera was "too big"—you know what they say about the size of man's lens—so I had to be surreptitous about it, and thus didn't get too many photos.

There was lots of music, as you would expect. But the acts I liked best surprised me. Dallas Green's City and Colour (with guest Gord Downie of the Tragically Hip) topped my list, even though I'd never heard of Green before. I'm a musical oldster, you see. Bryan Adams and Kathleen Edwards were also remarkable, singing without a backing band and turning out a marvelously affecting acoustic performance of "Walk On By," with strong harmonies. 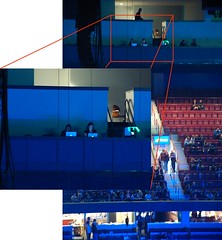 And Divine Brown again showed the amazing voice I'd heard a few nights before—she needs to get out from the overdone dance production on her album, I think.

We also spotted our live-blogging pals Miss604 and Arieanna (who had an awesome announcement the next day) in the rafters across from us. I snapped a picture before I got busted by the usher.

Since it was broadcast live across the country, the Juno ceremony started early (5 p.m.), and was over promptly at 7. We were home before the sun even went down, which is often just as well for us these days.

P.S. Yes, Nickelback started the show with a song called "Something in Your Mouth." And pyro effects coming from stage props designed to look like giant chrome exhaust pipes.

P.P.S. Does anyone know who buys all those Nickelback albums?

I live in America and i'm sick of Nickeback cause they get constant airplay, so I imagine it must be more painful for you being that you live in Canada. All thier songs start out the same, same riffs, same generic themes. The Police, on the other hand, is a much better popular band.

gah - I have no no idea who buys all those Nickelback albums, but it scares me very, very much...
as did Alan Doyle's beard, but that's another thread altogether :)

Nice capture - although we look so lonely and segregated hehe. Glad you had a nice time despite the Nickelback-love-fest that was going on.

*Raul ducks to avoid all the tomatoes being thrown at him*