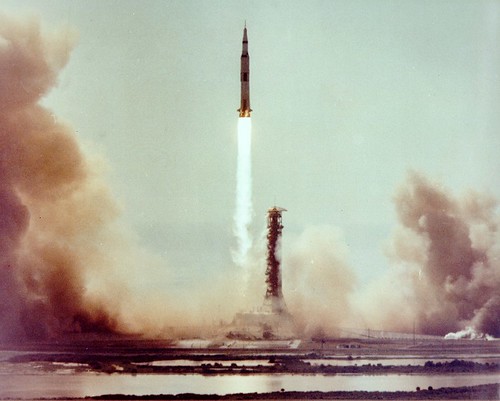 They were aboard the world's greatest machine, which put out about 175 million horsepower during launch. Less than three hours later, they exited Earth orbit and were on their way.

The notion of the Saturn V being the world's greatest machine, for me, underscores its historical context.

1969 was nearing the very end of the mechanical age, when machines worked as they did through cunningly aligned pressures and rotations. Nothing was contingent: on application of the same outside force, the same physical object would always behave the same way.

Computers may have been around in theory for a hundred years, and in high-end research labs for twenty, but they weren't really any part of the Moon shot, expect perhaps within the early design process. In 1969, expensive hand calculators were only just starting to displace the slide rule among übergeeks. The Unix epoch was still five months away. For realtime decisions, it would have taken far too long to encode the punch cards.

But by 1979 computers were miniaturized, and appearing in homes and appliances; by 1989 you could scarcely buy a machine without some sort of digital readout; by 1999 you could scarcely buy one without full digital control. Here in 2009 a machine which always does the same thing in response to macrophysical stimulus seems both astonishing and quaint; we marvel over the Internet and retronymically exclaim how "analog" it is.

So I wonder whether what really killed the space program through the 1970s was the rise of computers. We slowed down for a few years, and finally landed on the Moon for the last time on December 17th, 1972 -- the same year the scientific calculator, the 5.25" floppy disk, the mouse and the C programming language were all invented.

It's as though we eventually just stopped innovating with valves and pistons, and waited forty years for digital controls to catch up. Which would mean the Saturn V really was the world's greatest machine, not just to date but of all time, the last best triumph of the machine age.

I hadn't thought of it that way before, but that's a fascinating conception. I had always thought of it another way, as I wrote reviewing In the Shadow of the Moon in 2007:

"This film reminded me how amazing it was that we got there at all when we did, at pretty much the first moment it was technically possible. Not safe, not wise, not sensible, just possible."

We live not only in a more computerized time, but in a less absolute one. There seems little or nothing for which we as a human society will do anything, spend anything, risk anything. There are benefits to that, but there is also a price, and not achieving truly great things like Apollo is part of it.