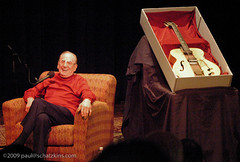 A few weeks ago I wrote about Les Paul, who died in mid-August at the age of 94. My podcast co-host Dave Chick and I decided that our next episode of Inside Home Recording would be a Les Paul special edition, dedicated to different aspects of Les's career, because as the inventor of multitracking and pioneer of solidbody electric guitars, he was so important to modern recording.

Tonight, we put that tribute episode (IHR #74, available as an enhanced AAC or audio-only MP3 podcast) online. In the process of putting it together, both Dave and I were astonished by how much Les Paul accomplished that we didn't even know about—most of it before we or any of our listeners were born.

I came to the conclusion, expressed in the our editorial at the end of the show, that Les was the single most important person in the history of modern recorded music—more important, on balance, than Thomas Edison or Leo Fender or Elvis or the Beatles or any of the other contenders.

You can listen to the show to find out if you agree. But it's indisputable that anywhere in the world where there is a microphone or a speaker, a Record button or a set of headphones—from every music studio or TV soundstage to every car stereo or iPod earbud, from every crummy punk dive bar to every high-end hip-hop nightclub, from the Amundsen-Scott outpost at the South Pole to the International Space Station—Les Paul played a part in making them what they are.