The most influential guitarist alive 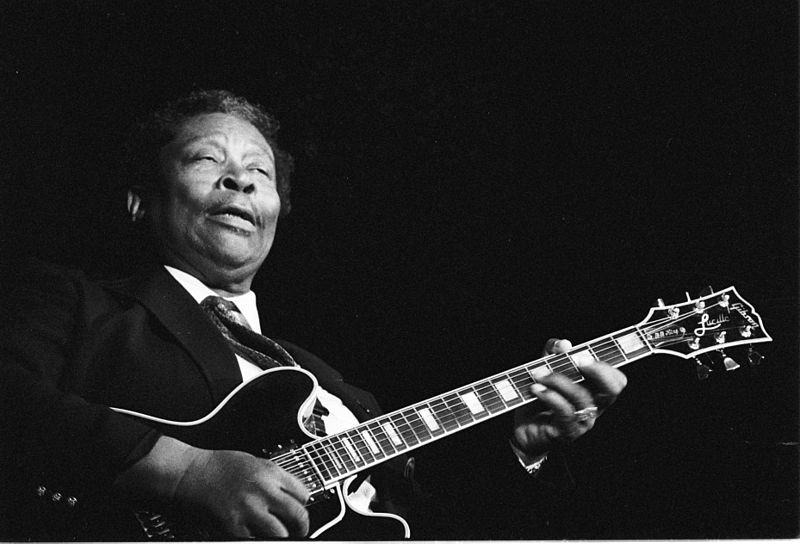 The one time I've seen B.B. King play live, more than 20 years ago, he didn't even have one of his famous Gibson guitars, nicknamed Lucille. His then-current Lucille was held up in transit somewhere, so for his gig at the 86 Street Music Hall in Vancouver, B.B. used a Fender Stratocaster rented from Calder Music (now Tom Lee Music) in North Van. As far as I know, they still have a photo on their store wall of him with that guitar.

King is one of the best-known guitarists of all time, and almost certainly the most influential one still alive today—maybe only Chuck Berry can compete. B.B. started his career in the late 1940s, and has largely outlived and outplayed his influences (such as Charlie Christian and T-Bone Walker), contemporaries (Les Paul, Muddy Waters, Albert King, John Lee Hooker, Albert Collins), and even many of his musical descendants (George Harrison, Jimi Hendrix, Duane Allman, Mike Bloomfield, Stevie Ray Vaughan).

If you hear someone play an electric guitar solo—whether in rock, jazz, country, R&B, even metal and punk—B.B.'s tone and approach are almost certainly in there somewhere. Horn-like phrasing, artfully bent notes, and a wide, liquid vibrato, as well as a full yet piercing tone tinged with overdrive, sometimes verging on feedback: those are the sounds of electric blues music, one and the same as the sounds of B.B. King's guitar playing. The sound extends to every player who's ever sustained a note with a wiggled fretting hand while holding his or her picking hand to the sky.

That influence is entirely aside from King's also-substantial legacy as a singer and relentlessly-touring live performer. When I saw him in Vancouver, B.B. had already been on the road for over 40 years, but his infectious energy and obvious joy in playing to an audience were still fresh, and taught me how to put on a good show during my own 20-year live-music career that followed.

B.B. King is still playing a show almost every day, and he'll be back in Vancouver in November, a couple of months after he turns 85 years old.