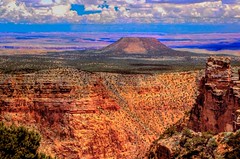 Most likely, I love the American Southwest for a simple reason: while not especially far away, it is so unlike the Pacific Northwest where I've grown up and lived my whole life. That, and it was the setting for the Road Runner and Coyote cartoons I loved watching with my dad as a kid. (Bonus: they're making new ones.)

Here around Vancouver we have magnificent trees in lush forests, towering mountains, beautiful oceans, snow and glaciers, sun and rain and a distinctive kind of slanted sunlight that helps those in the know identify movies and TV shows that are filmed here. We are a wet and green place.

In contrast, much of eastern California, Arizona, New Mexico, Texas, Utah, and Nevada is dry and orange. (Colorado and Wyoming are sometimes included too, though look at a map and they're not very south and not especially west in the U.S.A.) There are canyons, hoodoos, pueblo architecture, sagebrush, cactuses, and often relentless heat. I've travelled through much of that area, including the Colorado River a mile below me, Santa Fe, Meteor Crater, Zion National Park, Las Vegas, Carlsbad Caverns, and El Paso (which was, to be honest, a pit). I even saw a Space Shuttle land on the dry lakebed at Edwards Air Force Base near the wonderfully-named town of Boron, California.

When I think about that vast dry Southwest, I remember dust devils swirling across the Interstates; watching "Beavis and Butt-Head" on MTV for the first time in a motel on Route 66; the Hungry American Texas Pit Bar-B-Que in Roswell, New Mexico; a squirrel stealing food during my lunch break hiking part-way into the Grand Canyon; saguaro cactuses growing around the University of Arizona the way Douglas firs grow here; a rainbow made up only of reds, oranges, yellows, and browns in the sediments of mesas and escarpments; and the blast of hot air when opening the door to get out of an air-conditioned station wagon at each fuel-and-snack stop.

Of course it also evokes images of cowboys and miners, freight trains and wagon trains, nuclear tests and UFO sightings, the Navajo and Hopi and Zuni and the extinct Spanish Empire. It is both a new and modern place and an ancient one, sculpted by wind and heat and sand and eroding rivers in a different way than our Northwest landscape carved by the Ice Age, rainstorms, our own big rivers, and vegetation.

I really love how the brain just shuts down at the sight of the Grand Canyon. "Too big!!" "Can't process!" "Can't be real!" The only sight I ever saw in my life that was much more incredible than advertised. It seems like pictures can capture other landscapes in a way that prepares you for them, but the Grand Canyon just defies it.

I've said before that some things seem less spectacular in person than you expect (for me, giant sequoias, which, when you've grown up around almost-as-big cedars and firs, are nice but nothing all that special), some seem just about what you thought (Mount Rushmore), and some are way, way more impressive (the Grand Canyon).

When we were there, few tourists knew about it; now, it's overrun, and the character of the canyon, as well as the interaction with the Tarahumara people indigenous to this area is changing.

My parents were there on a train journey some years ago as well. You can find some impressive images online.