Still puppy after all this year 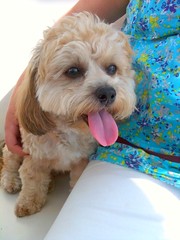 A year ago, on August 25, 2009, a puppy—half shihtzu, half toy poodle—was born. I don't even know exactly where that happened, but a little less than three months later, we bought her, and named her Lucy. She's become accustomed to us, and now we're her pack.

By the time dog is a year old, you probably shouldn't call it a puppy anymore, but since Lucy will always remain a small dog, we still think of her as one. Most often, when I return home and she's waiting, I greet her with, "Hello, Puppy."

Until we got Lucy, I never imagined myself as a Dog Person. Dogs always seemed like so much work as a pet—needy and inconvenient, especially for a family such as ours that likes to travel. And yes, they are. Yet our dog is also a great comfort, especially when I'm sick, and she makes us all happier. I now understand the appeal of dogs, the oldest domesticated animal.

Lucy is, of course, entirely unaware that she is one year old today, or even that such a thing as "a year" exists as a concept. We mark the occasion for our own benefit. Today we plan to take her to the dog park, where she'll have some fun and meet some other dogs. Woof woof.

Congrats to Lucy for finding a great pack to be part of, and to all of you for finding Lucy.

Our 2 dogs - Shih Tzu and Lhasa Apso cross - were definitely still puppies for a lot more than a year. Now at three and a half they're pretty grown up, and still a delight.

I hope Lucy has many happy returns of this anniversary.

Looks like Lucy has a bad case of Perma-puppy.
Hey, did you here the one about the guy that crossed a Shitzu with a Bulldog?