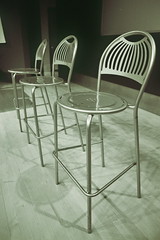 Since 2005, I've been going to (or at least involved with) Chris Pirillo's annual Gnomedex conference in Seattle. A couple of weeks from now will be Gnomedex 10, and from the sounds of it, that will be the last one.

I hadn't planned on attending this year: it's been a busy summer, and my wife Air and I didn't quite have the budget to go. (Plus the first night falls on our 15th anniversary.) But now, hearing that this pioneering leading-edge nerd-fest might soon be over, and being on a break from chemotherapy, I'm seriously considering booking a last-minute ticket for myself and driving down for that weekend—like last year, Air and I can celebrate our anniversary a day early, perhaps.

It's hard to describe what gives Gnomedex its mojo: while it is irredeemably geeky, and often covers trends in technology and society before they hit the mainstream, it's neither a dry technical meeting nor a science-fiction con. In a way, it's like an annual online-community family reunion, except all you need to do to join the family is show up. I've made lots of friends and deepened other friendships there. It's where I finally understood podcasting, jammed with one of the Presidents of the United States of America the same night I saw an original Monet "Water Lilies" painting, and stared in awe at a photo of the Earth from the surface of Mars while listening to a talk by one of the people who helped take the picture.

With luck, I'll get myself together enough to go, and see Gnomedex out in style. If this is the final one—which will be a pity—it will still have outlasted its (satirical) namesake COMDEX by seven years.

If you decide to go, I will sell you my ticket for half, because I registered and can't go:-)

I'll take that deal, though it's a pity I'll miss you there, Francine. I've emailed you, but if you don't receive that then ping me at dkmiller {at} penmachine {dot} com or on Twitter or Facebook and we can set it up. Thanks for the offer.

Thanks to Francine, it looks like I'll be there now.

Gnomedex probably wasn't profitable enough for all the work that goes into setting it up. Or traveling has become too expensive. Or maybe the bad economy..too bad though

Oh, I suspect so. The conference doesn't sell out instantly as it used to, the price has come down, sponsorships have become less extravagant, and so on. And I'm sure it's no less (probably more) work to organize. The economy can't help. It doesn't surprise me that it's ending, but it is too bad.

Chris Pirillo has given a brief interview about his reasons for ending Gnomedex after 10 years.

Looking forward to seeing you two there. It's sad that it's going to be the last one.

It's just me, Dave. Air isn't coming, though I will be driving down with kk+ and FierceKitty.