My iPad, a spontaneous wedding album 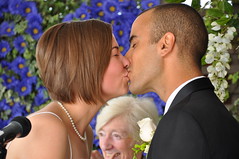 I think Tim Bray is right about what makes the new generation of tablet computers, led by the iPad from Apple, actually useful:

A tablet is, crucially, a more shareable computer. A laptop, with its fragile hinge-ware and space-gobbling keyboard, is just not comfy to share. A tablet is easier to bring to the café, easier to hand across the table or along the sofa, easier to seize in the heat of the moment, easier to hold up in triumph, easier to set aside when you need to meet someone's eyes.

Here's how that played out for me this week, somewhat unexpectedly. I was the official photographer for my cousin's wedding last weekend. That morning, I was preparing myself to take hundreds of pictures with both my film and digital SLR cameras. But, having just picked up the digital camera kit for my iPad earlier in the week, I thought it might be useful to bring the iPad along as a quick backup device onto which I could dump the digital files from time to time during the day. (Sometimes I'm a little paranoid about backups.)

After the ceremony itself, as everyone was settled in for the buffet brunch, but before speeches began, I plugged in the adapter and my camera's SD card and got most of the photos imported onto the iPad. (The process was a little flaky: after the first few hundred, the Photos app kept quitting, and though it remembered what it had imported, it would only do a few more pictures at a time before crashing again.) I didn't get everything backed up right then, but it was enough, especially since pictures of the ceremony itself were safe.

Then, as I flipped through the photographs to check them out, I realized something: I could pass the iPad around. My cousin and her family and friends could see pictures of the wedding, in a beautiful large picture-frame style that was easy and intuitive to flick through, before the event was even half over. They loved it.

Later that evening, I'd had a chance to get home, change clothes, and import the rest of the pictures before heading over to my aunt and uncle's house for the wedding after-party. There, more people, including the groom and his mom (who was visiting from Toronto), were able to see all the pictures on the iPad, the same day I'd taken them. A few of the group portraits included the groom's extended family—who, it turns out, had never all been in a photo together before, ever. He and his mom both got teary-eyed looking at them.

A few months ago I might have brought my laptop to import photos onto during the wedding. More likely, I wouldn't have bothered. And I certainly wouldn't have passed it around, since it's more awkward, fragile, and complicated to use when viewing pictures—particularly standing around in a crowded room of people who've had a few drinks.

I'm in the process of putting the best pictures from the wedding online, and I'll give everything to my cousin and her husband on DVD too, but the immediacy and poignancy of being able to display the pictures right there, during the events of the wedding day, made the iPad well worth what my wife paid for it in June.