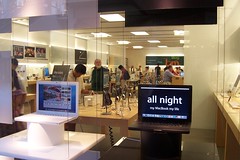 I tend to keep my computers running for a long time. Four and a half years ago, I bought my workhorse MacBook, soon after the model was first introduced. It has had its problems, but it has kept me entertained and productive, and still works with all the latest software, even if the hardware is showing its age. It, and my wife's matching black MacBook, are still the newest computers (not counting iPhones and the iPad) in our house.

For some months now, however, the power button on my computer has been flaky, sometimes working and sometimes not. That was fine as long as I never shut the computer down—always either letting it sleep or restarting it when necessary. Then I let the battery run down last week, and the MacBook shut itself off. And although everything else seemed fine, without a working power switch, there was no way to switch it on again, and thus to do anything with it. The MacBook was a brick. (Of course I have backups, so I wasn't worried about my data.)

After trying my usual voodoo tricks (which failed), I had to take it into the shop. Although the Apple Stores in Greater Vancouver are convenient, I like to give independent retailers a chance when I can—and as luck has it, Mac Station in Burnaby is the nearest Apple-authorized repair centre anyway. I had them take a look, and asked them to let me know what it would cost to fix.

The answer? Nothing! Even though my MacBook is well over a year past even its extended AppleCare warranty period, apparently there's some sort of secret Apple warranty for the top case—the part of the laptop housing that surrounds the keyboard, and includes the power button. My top case was showing cracks, so Mac Station ordered a new one, and it corrected the problem. Better yet, Apple covered the cost.

So, thanks Apple, and thanks Mac Station, for keeping my MacBook soldiering on for some time yet.

Wow, you're lucky, my Macbook, slightly younger than yours, and also out of extended warranty starting randomly shutting itself down almost two months ago. At first I thought it had something to do with the battery that wasn't charging, then I thought it was a problem with the power supply. I was losing whole paragraphs of my writing. I stopped working for the entire week before we went, on business, to Vancouver, where the nearest Apple authorized repair centre, who actually has a technician is. London Drugs in Prince George is an authorized repair centre but they have no tech. I was told I needed a new heat sink and motherboard that cost the same as a new Macbook. I was not happy but it is nice to have a new Macbook.

I figured it might work out that way for me too, so I was surprised by the actual result.

Given how so much of the blogging world and Twitter consists of complaints about products and services, it's always nice when someone takes the time to share a really positive experience they've had.

I've been a fan of Mac Station for a long time, and they've always gone that extra mile for me to find a way to make a repair happen more quickly or less expensively. Nice to see it's not just the Yaletown store that does that. :)

I've also had good luck over the years with Westworld Computers on Broadway for repairs. Since independent dealers now have to compete with the 800-pound gorillas of the Apple Stores, they have an extra incentive to do well these days. Also, if you're not comfortable with Craigslist and the like, they usually sell good used machines too.