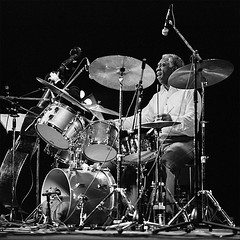 My dad loaned me his new CD copy of Art Blakey's Drum Suite album, which I wrote about the other day, so I've had a chance to listen to it in full for the first time in 25 or 30 years. (His old LP record was so scratchy he had to replace it.) It showed me how selective memory can be.

My deep childhood recollections are entirely of the first three songs—side A of the LP—"The Sacrifice," "Cubano Chant," and "Oscalypso," which are all pulsating slabs of delicious Afro-Cuban jazz rhythms. I must have heard side B before, but none of it sounded familiar. Even of the three initial tracks, there are big chunks I don't remember at all, like the piano parts in "The Sacrifice." But with other bits, like the Swahili gang vocals at the beginning, or the bizarre, semi-atonal cello strumming in "Oscalypso," I could sing or hum along seamlessly.

UPDATE: Reading the liner notes, I discovered that the original LP version of "The Sacrifice" had the piano and bass solos edited out for length, so I remembered correctly that they hadn't been there. Or, uh, when I didn't remember the piano, that was correct. Or something like that. Anyway, the CD re-release restores the full recording, so the piano and bass solos were new to me.

In keeping with my Beatles discussion recently too, there's a possibly-apocryphal story that John Lennon derided jazz, saying that it "never goes anywhere, never does anything." He had something of a point if you listen to side B of Drum Suite, which is full of more typical late-'50s swinging bebop improvisation, with noodly horns and tubby bass solos and the whole shebang. It's very good if you appreciate the genre, but I could see why a teenage Lennon in Liverpool might have hated the style, because it's intellectual, complex, grownup music. If you're a bag of raging hormones, rock-n-roll like Elvis and Little Richard and Gene Vincent would deserve to kick it off the pop charts.

Lennon and his fellow Beatles, of course, made sure that happened: as far as I know, Louis Armstrong's version of "Hello, Dolly!" was the last unequivocally jazz Billboard #1 hit, in 1964, the year the Fab Four took over the charts in the name of rock.

But while it's also certainly jazz, the Afro-Cuban percussion ensemble on side A of Drum Suite has a different emphasis. It's driven neither by melodic improvisation nor by chords, but by the endlessly inventive, interlocking rhythms. Two drum kits, congas, bongos, shakers, cowbells, timpani, piano, cello, vocal shouts, and more. I've speculated that the sound of those three tracks subliminally influenced my decision to become a drummer 15 years or so after I first heard them. Either that, or I had some predisposition for rhythm even as a very young kid, which is why I wanted to hear those tracks over and over. Perhaps a bit of both.

In some ways, the story of twentieth century popular music is the story of melody being taken over by rhythm. In America, and then throughout the world, Western concepts of harmony and composition were permanently altered by the pulse of Africa and the Caribbean. Blues and ragtime became jazz, and filtered into R&B and rock-n-roll, then soul and funk, disco and reggae, then dance, hip-hop and electronica. As a result, the songs on today's pop charts have more in common with southern prison work songs from 100 years ago than with the polite popular ditties of the same era.

The dark, scary interval of the final vocal at the end of "The Sacrifice" draws on those same work-song traditions, and still gives me freaky shivers. Here, listen to the last 20 seconds (MP3 audio) to hear what I mean.

It's understandable that you don't remember much of the B side - I hardly ever played it because I did not particularly like it. For that reason, too, that side is a lot less scratchy than the A side. With respect to the A side, my impression, too, is that some things don't sound quite the same, in particular there seems to be little reverberation for the Swahili chants; the reverb was probably added during the mixing of the LP version. - Dad

My memory of that extra reverb is so strong too that I've seriously considered importing the whole track into GarageBand and re-adding some reverb to the beginning and end chants myself. I think it sounded much better that way.